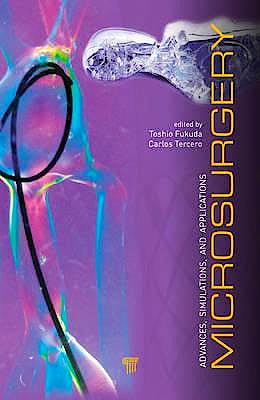 This book explains, using the example of endovascular intervention, the development of in vitro simulators for biomedical applications based on the scientific context in the robotics area and the explanation of the medical procedure to be simulated. It presents modeling methods for in vitro representation of human tissue and for representing tissue integrity during endovascular surgery simulation. Additionally, applications of this in vitro vasculature modeling technology are presented: flow control for human blood pressure simulation, computer fluid dynamics simulations using vasculature morphology, catheter insertion robot control and vasculature imaging based on magnetic trackers, and tailor-made scaffolds for blood vessel regeneration.

Carlos Tercero received his bachelor’s and Licenciature degrees from the Department of Electronics Engineering at Del Valle de Guatemala University, Guatemala, in 2002 and 2003. He received his M.S. degree from the Complex System Science Department of Nagoya University, Japan, in 2007, and Dr.Eng. degree from the Micro-Nano Systems Engineering Department of Nagoya University, in 2008. In 2008, he was the director of the Electronics and Mechatronics Engineering Departments at Del Valle de Guatemala University. Since April 2009, he has been with the Global Center of Excellence for Education and Research of Micro-Nano Mechatronics of Nagoya University, where he is mainly involved in the research fields of medical robotics and in vitro simulation for endovascular intervention. He is the recipient of the Society of Instrument and Control Engineers Technical Field Award (2010) and the International Symposium on Micro-Nano Mechatronics and Human Science Best Paper Award (2010) and also IEEE/RSJ International Conference on Robots and Systems ICROS Best Application Paper Award finalist (2010).