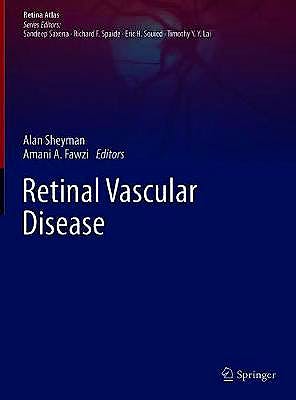 This atlas extensively covers numerous aspects of retinal vascular disease, e.g. topics in retinal and vascular imaging ranging from common diseases such as diabetic and hypertensive retinopathy to rarer entities including sickle cell retinopathy and Coats disease. It primarily focuses on the imaging of these disorders, while also discussing various therapies and management decisions.

Dr. Alan Sheyman graduated from the Albert Einstein College of Medicine in New York, and completed his ophthalmology training at the Icahn School of Medicine in New York and Northwestern University in Chicago. He was an assistant professor of ophthalmology at the University of Maryland in Baltimore, Maryland. He is currently affiliated with the New York Eye and Ear Infirmary and the Icahn School of Medicine at Mount Sinai. He specializes in vitreoretinal diseases and has a special interest in retinal vascular disease and complex retinal detachment repair. He has published in numerous peer-reviewed journals on a broad range of retinal diseases. He is a member of the American Academy of Ophthalmology and the American Society of Retinal Specialists, and serves as an editor for several peer-reviewed journals.

At Northwestern, Dr. Fawzi runs an active NIH-funded translational research laboratory. Her lab studies animal models of ischemic retinopathies, while her clinical research focuses on novel functional retinal imaging approaches including OCT angiography, visible-light OCT and hyperspectral imaging. Dr. Fawzi serves on the editorial boards of Scientific Reports (Nature), Retina and Investigative Ophthalmology and Visual Sciences, as well as several NIH study sections. She has authored/coauthored over 160 peer-reviewed articles and has been elected as a member of the retina and macula societies. She has received the honor award from the American Society of Retina Specialists and the achievement award from the American Academy of Ophthalmology.