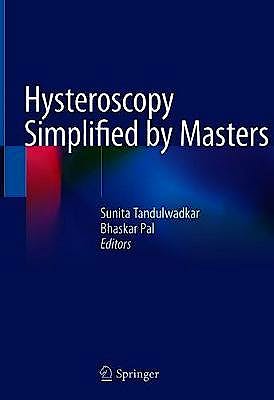 The book covers all aspects of hysteroscopy, adenomyomas, diagnosis, management, fact and fiction, and related technological advances. It includes detailed descriptions of the history and evolution, instrumentation, and energy sources used in hysteroscopy. Further chapters cover the process of setting up hi-tech hysteroscopy units, and the maintenance and sterilization of all instruments used during surgery. The book also examines the role of hysteroscopy in infertility and recurrent pregnancy loss, uterine malformations and endometrial polyps in detail. All chapters were written by respected international experts, and are richly illustrated with colour hysteroscopic images.

Given its scope, the book offers a valuable resource for all gynaecologists and graduate students.

She is the president elect of the International Association of Gynecological Endoscopy (IAGE) - (2019-2020); chairperson and founder secretary of Maharashtra State Chapter of the Indian Society For Assisted Reproduction (ISAR) (2018-2020); and joint general secretary of ISAR (2018 - 2019). She was an elected board member of the International Society of Gynecologic Endoscopy (ISGE) - (2013 - 2017), and of the Academic Council of Indian College of Obstetricians and Gynecologists (ICOG) (2014-2017). She was chairperson of the Infertility Committee of the Federation of Obstetrics and Gynecology of India (FOGSI) - (2011 - 2013) and the west-zone vice president of FOGSI. She has published several books and contributed many book chapters. She is an active member of various national and international societies and committees. Dr Tandulwadkar also conducts workshops and trainings to help educate promising future doctors.

Bhaskar Pal MD, DGO, DNBE (obstetrics & gynecology), MRCOG (UK), FICOG, FRCOG (UK) has been a Senior Consultant in Obstetrics and Gynaecology at Apollo Gleneagles Hospital, Kolkata for the past sixteen years. His area of interest is minimal access surgery. He has authored over 30 publications and book chapters and has co-edited four books.