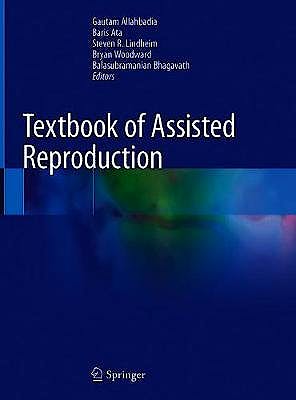 Groundbreaking, comprehensive, and developed by a panel of leading international experts in the field, Textbook of Assisted Reproduction provides a multidisciplinary overview of the diagnosis and management of infertility, which affects 15% of all couples around the world.

The book aims to cover all aspects of assisted reproduction. Particular attention is given to topics such as the assessment of infertile couples; assisted reproductive techniques (ARTs) including ovulation induction, intra uterine insemination (IUI), in vitro fertilization (IVF) and intracytoplasmic sperm injection (clinical and laboratory aspects); reproductive genetics; and obstetric and perinatal outcomes.

Gautam Nand Allahbadia is Consultant Reproductive Endocrinology & IVF at the Millennium Medical Center, Al Thanyah; Canadian Specialist Hospital, Dubai; Dr Amal Elias IVF Center, SZ Road; Bourn Hall Clinic, Jumeirah, Dubai, UAE as well as Indo-Nippon IVF, Mumbai India. He was the founder of Rotunda - The Center for Human Reproduction, the world-renowned chain of IVF Centers in India. He is a noted world authority on Ultrasound-guided Embryo transfers and one of the pioneers in Third Party Reproduction in Southeast Asia. Dr. Allahbadia was responsible for India's first trans-ethnic surrogate pregnancy involving a Chinese couple's baby delivered by an unrelated Indian surrogate mother. Gautam N Allahbadia, MD is the Emeritus Editor of the Journal of Obstetrics & Gynecology of India as well as the IVF Lite (Journal of Minimal Stimulation IVF).He cherishes over 150 peer-reviewed publications, 134 book chapters and 25 textbooks, the latest being a comprehensive text published by Springer Nature, entitled "The Art & Science of ART", and is on the Editorial Board of several International Journals. Dr. Allahbadia was elected as the Vice President of the World Association of Reproductive Medicine (WARM), headquartered in Rome, and "Mumbai's Top Doc" for 2012 by a peer nomination process.

Baris Ata, M.D., M.Sc. is Professor of Obstetrics and Gynecology, Chair of the Department of Obstetrics and Gynecology, Koc University School of Medicine, and the Director of the Assisted Reproduction Unit, Koc University Hospital, Istanbul. He authored over 100 peer reviewed publications and numerous book chapters on infertilty, assisted reproduction and endometriosis. He sits on the editorial boards of several renown journals in the field. He is the recipient of multiple awards of excellence in clinical practice and research. He is the vice president of the Turkish Society of Reproductive Medicine and an executive committee member of the European Society of Human Reproduction and Embryology.

Steven R. Lindheim is professor of Obstetrics and Gynecology, Division Chief of Reproductive Endocrine & Infertility at Wright State University, Boonshoft School of Medicine in Dayton, Ohio. He currently is President of the Society of Reproductive Surgeons and Associate Editor for Fertility Sterility. Dr Lindheim has published more than 200 peer review articles and book chapters and has been voted "Top Doctor" on multiple occasions throughout his career.

Bryan Woodward (BSc,MMedSci, PhD, FRCPath) has been a reproductive scientist since 1990, when he began his career at Sheffield Fertility Centre, South Yorkshire, UK. He was then invited to direct the IVF laboratory at the BUPA Hospital in Leicester, UK in 1995. He has since helped to establish numerous IVF clinics in Africa, Asia and the Caribbean. In the UK, Bryan has served on the Executive Committees of the Association of Clinical Embryologists (ACE) and the Association of Biomedical Andrologists (ABA). He is passionate about training reproductive scientists and is presently the Coordinator of the ESHRE Embryology Certification Committee.

Bala Bhagavath, MD is Professor of Obstetrics and Gynecology (CHS) at University of Wisconsin, Madison. In the past he has been faculty at Brown University and University of Rochester. In addition to his expertise in management of infertility, he is an accomplished reproductive surgeon and has been President of Society of Reproductive Surgeons. He has practiced medicine in India, Singapore, United Kingdom and USA.