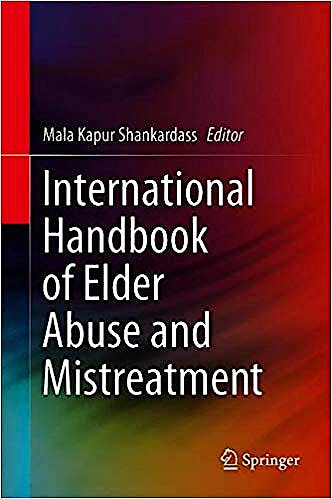 This first-of-its-kind work on elder abuse and mistreatment provides a comprehensive and up-to-date overview of the subject. Covering almost all regions of the world, it highlights different dimensions of elder abuse and mistreatment in terms of their prevalence, incidence, prevention, treatment, management and response from governments and civil society, academic and research communities, and society in general. Written by international specialists from various disciplinary and presenting the latest findings and data, the handbook includes sections on the Americas; the Caribbean; Europe; Central, West and South Asia; East Asia and Asia-Pacific; and Africa. The chapters offer clarity on the concept and forms of elder abuse and neglect, discuss research methodology, and provide policy options, legislative solutions and programmatic responses to give relief to older people as victims of abuse and neglect as well as to deal with the perpetrators. This book is intended for a wide range of students and researchers interested in aging, from sociology, to social work, community medicine, public health, clinical psychology, and human rights/law.

Dr. Mala Kapur Shankardass, Ph.D., is an Associate Professor at Maitreyi College, University of Delhi (South Campus), New Delhi. A trained sociologist, health social scientist and gerontologist she consults with United Nations agencies and other international and national organizations in India and abroad on ageing, gender, health, and development issues. She holds the International Network for Prevention of Elder Abuse (INPEA) Chair for Asia and is on the editorial boards of the Journal of Adult Protection and the Polish Social Gerontology Journal. She is a member of the governing body of the Alzheimer's and Related Disorders Society of India, Delhi Chapter and a Resource Person with a number of government and non-government organizations and institutions in India; a member of the advisory board for Gerontology, published by Cambridge Scholarly Publishing, United Kingdom; and a member of the National Advisory Board of the Journal of Indian Academy of Geriatrics. She was one of the experts involved in the formulation of the National Policy for Older Persons in India in 1998-99 and was nominated as a member of the State Council for Older Persons constituted by the Delhi State Government in 2010-2011. She is has been a member of the Core Group on Protection and Welfare of the Elderly Persons, founded by the National Human Rights Commission, since 2010.

Dr Shankardass has published numerous articles in respected journals, magazines, newspapers and books in India and abroad. Her books include Growing Old in India: Voices Reveal and Statistics Speak (2004); and Abuse and Neglect of the Elderly in India (co-edited, Springer). She takes part in media discussions on socially relevant topics for prime television and radio channels, and is a life member of the Indian Sociological Society, Indian Association of Gerontology, and Indian Association of Social Science and Health.