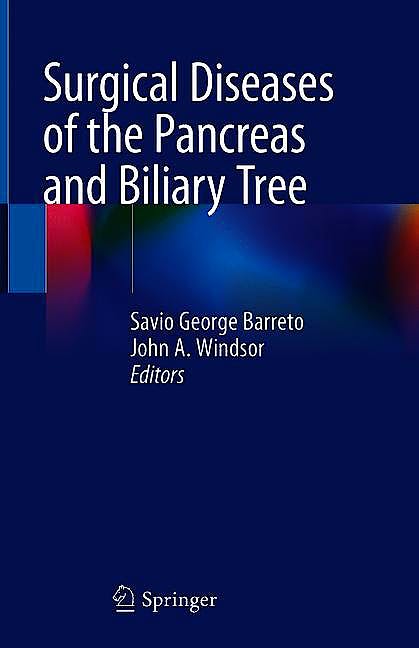 Surgical Diseases of the Pancreas and Biliary Tree

This book provides an evidence-based approach to the diagnosis and surgical management of the diseases of the pancreas and biliary tree, highlighting the most recent findings. The chapters are designed to accompany the reader on a step-by-step approach to the patient, providing the latest evidence to justify each recommendation. Wherever feasible and indicated, emphasis is placed on the use of tables and algorithms to simplify decision-making.

The information contained in this well-referenced book is thus relevant not only to practicing pancreatobiliary and general surgeons, but also offers valuable guidance for surgical trainees.

This book covers 14 diseases of the pancreas and biliary tree, from the more common gallstones and common bile duct stones, acute and chronic pancreatitis, to more complex benign conditions such as biliary fistulae and strictures, as well as cystic tumors of the pancreas, and finally the major malignancies include gallbladder cancer, pancreatic cancer and hilar cholangiocarcinoma.

Dr. Barreto is a Gastrointestinal and Hepato-Pancreato-Biliary (GI & HPB) surgeon and researcher. He completed his undergraduate and post-graduate surgical degrees at Goa Medical College and Hospital, where he also trained in Internal Medicine and General Surgery. He completed his fellowship in GI & HPB Surgical Oncology at the Tata Memorial Hospital in Mumbai, and his training in GI and Liver Transplant Surgery at Flinders Medical Centre and the Royal Adelaide Hospital, South Australia. After serving a year as the Chief Surgical Resident at Modbury Hospital, South Australia, Dr. Barreto returned to India. His career includes appointments as Consultant Surgical Oncologist at the Department of GI & HPB Surgical Oncology, Tata Memorial Centre, Mumbai India and as Consultant Surgeon at the Department of GI Surgery, GI Oncology and Bariatric Surgery, Medanta - The Medicity. He is currently a Senior Lecturer at the College of Medicine and Public Health, Flinders University, South Australia. Dr. Barreto secured his Doctor of Philosophy degree from Flinders University for his work on the neuropeptide galanin and its antagonists, their effects on pancreatic exocrine secretion, and their role in acute pancreatitis. His interests focus on the basic science and surgical aspects of acute pancreatitis, pancreatic, gastric, and gallbladder cancer. He has published a carcinogenesis model in gallbladder cancer to aid in understanding the development of the cancer and to further therapy-directed research. He, along with Professor John Windsor, has proposed the first evidence-based definition of early gastric cancer. Dr. Barreto has authored more than 150 clinical and basic science research papers as well as book chapters on GI and HPB-related topics and has been invited to lecture on his work all over the world. He serves on the Indian Council of Medical Research Task force groups for the development of guidelines for the management of gastric, pancreatic and neuroendocrine cancers for India.

Professor Windsor grew up in the Indian Himalayas, completed his surgical training in Auckland and his specialist HBP training in Edinburgh. He is currently an HBP and Upper GI Surgeon at the Auckland City and Mercy Hospitals. He holds a personal chair in Surgery, is Director of Surgical Research, and Assistant Director of the national MedTech Centre of Research Excellence. For over 30 years he has been active in promoting research and education, especially in the training of surgeon scientists. His surgical interests include the management of acute and chronic pancreatitis, pancreatic cancer, and gastro-oesophageal reflux and cancer. His research interests include the pathophysiology of acute pancreatitis, the role of toxic mesenteric lymph in critical illness, and the mapping and modulation of gastric electrical activity. He has published over 380 peer-reviewed manuscripts and has an H-index of 60, over 200 invited lectures and 8 visiting professorships to his credit. Has been Secretary General of the International Hepato-Pancreato-Biliary Association and Chair Section of Academic Surgery at the RACS. He has been awarded the Gluckman Medal for distinguished reseach contributions to the University of Auckland, the Sir Louis Barnett Medal for distinguished contributions to the RACS, and elected a Fellow of the American Surgical Association and the Royal Society of New Zealand.