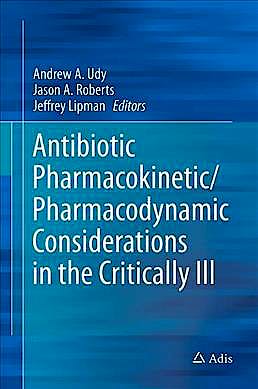 This book provides unique insights into the issues that drive modified dosing regimens for antibiotics in the critically ill. Leading international authors provide their commentary alongside a summary of existing evidence on how to effectively dose antibiotics.

Severe infection frequently necessitates admission to the intensive care unit (ICU). Equally, nosocomial sepsis often complicates the clinical course in ICU. Early, appropriate application of antibiotic therapy remains a cornerstone of effective management. However, this is challenging in the critical care environment, given the significant changes in patient physiology and organ function frequently encountered. Being cognisant of these factors, prescribers need to consider modified dosing regimens, not only to ensure adequate drug exposure, and therefore the greatest chance of clinical cure, but also to avoid encouraging drug resistance.

Andrew Udy is an intensive care specialist at The Alfred, and Associate Professor and Co-Deputy Director, the Australian and New Zealand Intensive Care Research Centre, Monash University. He is Deputy Chair of the Victorian Regional Committee, College of Intensive Care Medicine, and is the Victorian Representative on the ANZICS Clinical Trials Group Committee. His research interests include: optimised drug prescribing in the critically ill, haemodynamic management in severe sepsis, acute kidney injury and renal replacement therapy, and neurocritical care practice. He has published over 80 peer-reviewed papers, contributed to 7 book chapters, and acts as a reviewer for multiple critical care journals internationally. He has also been awarded an Australian NHMRC Early Career Fellowship, and in 2015 was awarded an Early Career Researcher Excellence Award from Monash University.

Jason Roberts is an intensive care unit pharmacist at the Royal Brisbane and Women's Hospital and is a Professor of Medicine and Professor of Pharmacy at The University of Queensland. He also serves on various local, national and international societal committees in areas of critical care, infectious diseases and pharmacy. His research interest is primarily in optimization of antibiotic dosing in difficult-to-treat patient populations. He has published 300 papers and contributed to >20 books. He provides official Editorial roles with International Journal of Antimicrobial Agents and Journal of Pharmacy Practice and Research. He has also been awarded Australian NHMRC Practitioner Fellowship (2017-21) and in 2015 was named as a recipient of a Young Investigator Award within the European Society of Clinical Microbiology and Infectious Diseases.

Jeffrey Lipman is a career Intensivist having worked solely in Intensive Care Units since specialising in South Africa. Since arriving in Australia in 1997, he has been Director of Intensive Care Services at Royal Brisbane and Women's Hospital and Professor and Head of Anaesthesiology and Critical Care at The University of Queensland. His research interests cover all aspects of sepsis with a particular interest in antibiotic dosing in the critically ill, a topic on which he obtained his MD from Chinese University of Hong Kong. He has published almost 500 papers and contributed to 26 book chapters. His has editorial roles in a number of journals and reviews for many more. He has received various Awards for his service to Critical Care from official bodies in South Africa and Australia.