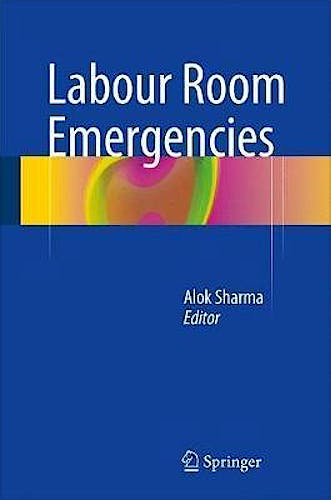 Developed by a panel of leading experts in the field of obstetrics, this book provides an overview of disease presentation, treatment, protocols and outcomes in the field of obstetrics. This exhaustive compilation is a culmination of a targeted multidisciplinary approach and evidence based management in obstetrics. Up to date and easy to understand, it offers a blend of widely accepted guidelines, practical clinical know-how and the latest advances in the field, covering all the emergencies encountered in the delivery room.

Dr Alok Sharma was awarded an M.B.B.S. by Indira Gandhi Medical College (IGMC), Shimla in 1997. He received a postgraduate degree in Obstetrics and Gynaecology in 2010 from Kamla Nehru state hospital for Mother & Child, IGMC, Shimla, Himachal Pradesh, India, where he currently works as a registrar. He is the founder secretary of the Indian Menopause Society, Shimla Chapter and also of the Indian Fertility Society - Himachal Pradesh Chapter. He is national coordinator of the Federation of Obstetricians and Gynaecological Societies of India (FOGSI) Sexual Medicine committee and North Zone coordinator of the Perinatology Committee, Safe motherhood Committee, MTP Committee and Public Awareness committee of FOGSI. He is an active member of various academic and professional bodies. He has edited two books on obstetrics for postgraduates in obstetrics and gynaecology and has published several articles in various national and international journals. He is the author of numerous book chapters and has participated in a number of national and international conferences and workshops. He is not only active clinically but also in promoting women's role in society. He is the recipient of BEST CITIZENS OF INDIA AWARD, 2015, as well as the Shimla Gaurav Award for his contribution to medical science.