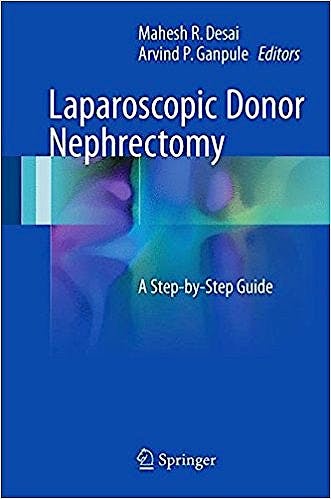 This book explains the development of various laparoscopic donor nephrectomy (LDN) techniques, which can be performed via the retroperitoneal or the transperitoneal approach. It provides a step-by-step explanation of LDN, including details of intricacies such as port positioning,dissection steps, securing the hilum and retrieval. It also reviews new techniques like robotic donor nephrectomy and single-port donor nephrectomy. Lastly, it explores the non-technical but equally important issues of donor work-up and legal and social aspects.

LDN is a unique surgical procedure in which the surgeon operates on an individual who is not a patient but someone donating out of altruistic motives, and it has to be “zero error” for the safety of the graft, donor and the recipient. This handbook is a valuable resource for urologists, general and transplant surgeons as well as anesthesiologists and medical social workers working in the field.

Mahesh Desai obtained his MBBS (1966) and M.S. in General Surgery (1970) from B.J. Medical College, Pune University. He received fellowship (FRCS) from the Royal College of Surgeons of London and Edinburgh in 1973and FACS in 2015. He has held many national and internationalpositions in the field of Urology such as: President, Urological Society of India (2006-2007); President, Society International d’Urologie (SIU) (October, 2011 - 2012); and President, Endourology Society Inc.  (2012-2013).

Dr Desai has conducted more than 2500 renal transplants and 900 laparoscopic donor nephrectomies. He has published 150 scientific papers in indexed journals and contributed in more than 30 books. He was awarded the Dr. B.C. Roy National Award for the year 2000 in by the Presidentof India. He has also received the President’s Gold medal of Urological Society of India and American Urological Associations, Presidential Citation for the year 2012 and Life Time Achievement Award from Endourological Society Inc. for the year 2014.  He is the recipient of St. Paul’sMedal (2012) by British Association of Urological Surgeons.

Arvind P. Ganpule is currently, Vice-Chairman in the department of Urology and Chief, division of laparoscopic and robotic surgery at Muljibhai Patel Urological Hospital (MPUH), Nadiad, India.  Dr. Ganpule has over 115 publications to his credit in reputed peer-reviewed journals. He hasauthored a book and 25 book chapters. He was a lead investigator in the largest epidemiological study in India, investigating the natural history of BPH in western India. He has innovated a novel low-cost retrieval bag in laparoscopy known as the Nadiad bag. He was also involved with theteam at MPUH, Nadiad, India in developing the micropercTM system with PolydiagnostTM GmBH. His area of special interest is laparoscopic approach to donors and robotic kidney surgery.

Dr. Ganpule is a recipient of the prestigious MIUC scholarship of the Urological Society of India. He has also received the F1000 AFM travel Award and grant (for excellent post publication reviews) consecutively for three years (2012-2014). He was entitled the ‘AUA-USI (Chakravartyfellowship)’ scholar for year 2012.