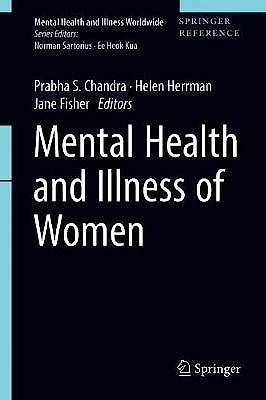 Mental Health and Illness of Women

This book discusses psychiatric disorders among women in a manner that is relevant to clinical practice and keep cultural and social realities in perspective. The book is important in the face of rapidly changing conditions globally (including better education and more opportunities for work for women); challenges such as migration, war and violence and emerging areas such as newer reproductive technologies, Women's mental health cannot be divorced from social and cultural realities and while the book emphasises these areas, it also gives due importance to the current advances in neurobiology and psychopharmacology of psychiatric disorders among women. Chapters in the book are written by multiple authors, many of the chapters use the life stage approach, and have been written by authors from different parts of the world to ensure cultural relevance and diverse viewpoints.

Prabha S.Chandra is a Professor of Psychiatry at the National Institute of Mental Health and Neurosciences, Bangalore. Her main research interests have been in the areas of women's mental health and psychiatric aspects of HIV infection and Cancer. Dr. Chandra has received several awards for her research in women's mental health and perinatal psychiatry. She has been an executive member of the Marce International society for perinatal psychiatry and is the Secretary of the International Association Women's Mental Health.

Jane Fisher is Professor of Women's Health and Director of the Jean Hailes Research Unit in the School of Public Health and Preventive Medicine at Monash University in Melbourne Australia. She is an academic Clinical and Health Psychologist with interests in public health perspectives on the links between women's reproductive health and mental health from adolescence to mid-life, in particular related to fertility, conception, pregnancy, birth, and the postpartum period. She is particularly interested in building evidence about the social determinants of mental health problems including in low and lower-middle income countries.

Helen Herrman is Director of Research at Orygen: The National Centre of Excellence in Youth Mental Health, and Professor of Psychiatry in the Centre for Youth Mental Health, The University of Melbourne, Australia. She is Director of the World Health Organization (WHO) Collaborating Centre for mental health in Melbourne. She is President Elect of the World Psychiatric Association (WPA), President of the Pacific Rim College of Psychiatrists, and President of the International Association of Women's Mental Health. From 1992 to 2005, she was Professor and Director of Psychiatry in St. Vincent's Health Melbourne during development of an integrated hospital and community area mental health service under Australia's national reform of mental health care.