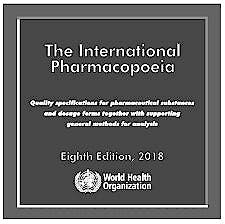 The International Pharmacopoeia is based on advice and decisions from the WHO Expert Committee on Specifications for Pharmaceutical Preparations (ECSPP). All specifications included in this Eighth Edition have been developed following the WHO consultation process and were adopted by the ECSPP. New and revised texts.

This eight edition of The International Pharmacopoeia contains: