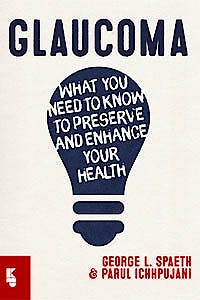 Glaucoma. What You Need to Know to Preserve and Enhance Your Health

Preface Why This Book Was Written

Chapter 2 What Is Glaucoma?

Chapter 3 Who Is at Special Risk for Developing Glaucoma?

Chapter 4 The Diagnosis of Glaucoma

Chapter 5 The Classification of Glaucoma

Chapter 8 What to Do If You Have Visual Problems

Chapter 11 An Overview of This Book About Glaucoma, Seeing, and Caring for Oneself

Why This Book Was Written

One day, two new patients came to see me; both were 30 years old and in excellent health, with no known problems other than in their eyes. The first was a woman referred by a corneal surgeon, to whom she had come for a difficult type of corneal transplant. As an infant, she had had many surgical procedures for glaucoma; these saved the health of her optic nerves but damaged her corneas so she could only see large objects moving; even with optical devices she could not read anything. The second individual had fallen and ruptured his right eye; this was beautifully repaired by a retinal surgeon. In his undamaged left eye, he could read very well, called “20/20 vision.” With his operated eye he could also read well, with “20/30 vision”. Which of these two thirty-year-olds was disabled? The man said he was totally disabled and did not work because he could not see (even though he really had good sight in both eyes). The woman, who had not been able to read since childhood, was vivacious, positive, colorfully dressed, and had just graduated first in her class from an internationally renowned law school.

That same day I examined two middle-aged teachers. The first had been sent to me for glaucoma surgery. She could barely see the largest line on the vision chart and said her eyes were terribly painful. She was using four types of eye drops and twelve different oral medications, but did not know the names of any of the drops, nor why she was taking the pills. She had gone to her ophthalmologist for reading glasses six months earlier. He told her she had glaucoma and that she needed to start taking eye drops. At the time of my examination, her eyes looked like raw hamburger but her optic nerves were healthy, without any signs of glaucoma damage. Over the next two months, she was weaned off all four eye drops and most of her pills. Her vision returned to normal, and she felt stronger and more energetic.

The other teacher had a somewhat similar history, in that she needed reading glasses, had been told she had glaucoma, and was started on eye drops. But unlike the first teacher, she was aware that her vision got much worse when she used the drops and that her eyes became bright red; she mentioned this to her eye doctor. He said she had to continue the eye drops. She asked for a consultation, which he said she did not need. So, she came to see me. I saw no certain signs of glaucoma, stopped her eye drops, and suggested she go to the drug store and try on various reading glasses until she found a pair that allowed her to read well. One month later she could see well in both distance and up close, and her eyes were no longer red and uncomfortable. Which of these two teachers took good care of themselves? One just did what she was told; the other took responsibility for her health. This book was written because I wanted to share what these and other patients, life experiences, and loving people have taught me.

What is clear to me now is that to be as healthy as possible, the most important thing a person can do is to take care of him- or herself well. Many studies have shown that when people engage in their own care, they are healthier and happier. I had no idea about this when I graduated with honors from Harvard Medical School; followed by an internship at the University of Michigan; graduate school at the University of Pennsylvania (first in class); ophthalmology residency at the largest, oldest American eye training program, the Wills Eye Hospital (Chief Resident); and a fellowship at the National Institute of Neurological Diseases and Blindness. Doctors are not taught how to help people take care of themselves. They are told “the doctor knows best.” Wrong. Of course health professionals can help. Of course health professionals should know things their patients do not know. But they also often bring a perspective to bear on a particular situation that may not fit the patient’s perspective; doctors want to help but can also cause harm, as happened to the two teachers I described above.