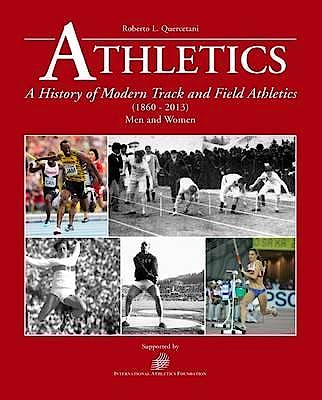 A book featuring lots of facts from the world of athletics, a book meant to last..Roberto L. Quercetani, in the last thirty years, has edited so many books dedicated to the history and to the statistics of world athletics, all available all around the world and regarded as the 'Bible' of athletics; the time had come for a book which tells sports stories and curious facts, always about athletics.Facts, figures, people, unpredictable results and events which took place behind the scene of modern athletics from the end of the 19th century up to present days.The book also features statistics recreated with an innovative and interesting method. The present book is peculiar in its kind as it consists of a number of asides, old and new, devoted to curious episodes emanating from the myriad of facts and figures of this most varied of sports. These cover all epochs of modern track and field athletics.Entirely new is the part devoted to special statistical studies touching different epochs of the sport.

For example: the relation between height and personal bests for leading sprinters and/or high jumpers, or the range of personal records achieved by leading athletes in such different sectors as 100-200-400 metres, or long-triple jump. Such a galaxy of reflections was gathered from studies involving practically every section of the sport.

Roberto Luigi Quercetani, born in Florence, Italy, in 1922, has been for over sixty years one of the most well known journalists at the international level , active in track and field athletics. An enthusiast for historical and statistical details, in 1950 in Brussels he was one of the founders, as well as its first president, of the ATFS (Association of Track and Field Statisticians), which constitutes the most authoritative reference point for all those who want to find their way through the jungle of facts and figures which are part and parcel of athletics. RLQ has edited from 1948 onwards many historical and statistical books on the history of all men's and women's events. As a free-lance sport journalist he covered many of the major international meets held throughout this long period of time in practically every corner of the world.