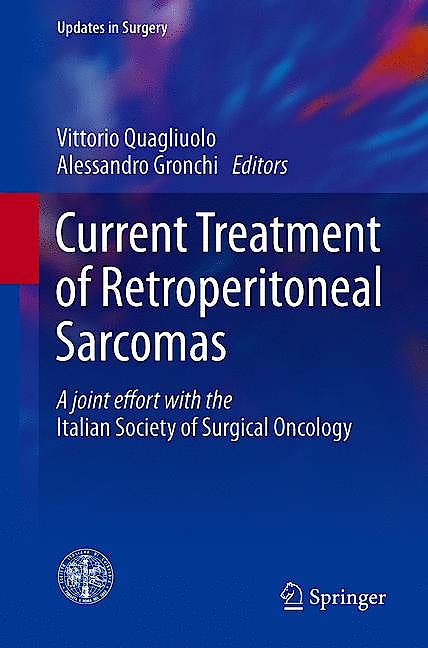 This book provides a comprehensive overview of the approach to retroperitoneal sarcomas, rare and challenging tumors requiring highly specialized, multidisciplinary management. Based on an updated review of the literature and drawing on the expertise of respected authors, it analyzes key topics - such as pre-operative work-up and staging, multimodal therapy, multi-organ resection, surgical complications and management of local recurrence and advanced disease - as well as several other debated issues.

Presenting surgery as the cornerstone in the treatment of this disease, the book serves both as a guide for non-expert physicians wishing to understand the best management of RPS patients, including the need to refer them to specialized centers, and as a state-of-the-art overview for surgeons with interest in sarcoma surgery.

Vittorio Quagliuolo specialized in surgery of the digestive tract and in clinical oncology at the University of Milan. He started his career at the Istituto Nazionale dei Tumori in Milan under the direction of Prof Umberto Veronesi and mentored by Prof Leandro Gennari. His interests focused on tumors of the low rectum, hepatic metastases, and on the surgical treatment of sarcomas of the limbs, trunk and retroperitoneum, in particular on the conservative surgery of mesenchymal tumors. Since 1997 he has worked at the Humanitas Cancer Center - from 2001 to 2010 as Chief of the Sarcoma Unit and since 2011 as Director of the Division of Surgical Oncology.
He is a founding member of the European Society of Mastology (EUSOMA) and the Italian Sarcoma Group (ISG) and member of the Trans-Atlantic Retroperitoneal Sarcoma Working Group (TARPSWG). He has participated in several surgical trials of the ISG and is currently involved in the European Organization for Research and Treatment of Cancer's STRASS trial investigating neoadivant radiotherapy in retroperitoneal sarcomas.

Alessandro Gronchi received his medical degree (high honors) in 1992 and board certification in General Surgery in 1997 from Milan University. He did a fellowship in Surgical Oncology at the National Cancer Institute - Milan - Italy in 1998. He has been chair of the Sarcoma Service at the National Cancer Institute - Milan - Italy since 2001. He has a life-time professional dedication to soft tissue sarcomas (STS), desmoid-type fibromatosis (DF) and gastrointestinal stromal tumors (GIST).