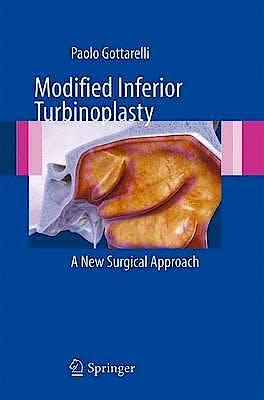 Humans can resist 40 days without eating and 4 days without drinking, but only 4 minutes without breathing: this tells us much about its fundamental importance. Restoring an efficient nasal function is a very important – and in some cases crucial – issue.

This book describes an innovative surgical technique called modified inferior turbinoplasty, which offers an excellent solution to the problems associated with the lower turbinate hypertrophy. A turbinate (or nasal concha) is a long, narrow, curled bone shelf that protrudes into the breathing passage of the nose. Most surgical interventions treat only the soft parts of hypertrophic turbinates and often lead to relapse. With this technique, in contrast, all anatomic parts of the turbinate are treated and swabs in the nose are completely avoided, which is fundamental for patients well-being and a quicker recovery.

The book will be very useful for othorinolaryngologists, plastic surgeons, endoscopic and maxillofacial surgeons.

Paolo Gottarelli was born in Bologna, Italy in 1952. He obtained his MD at the University of Bologna in 1978 and subsequently specialized in plastic surgery and odontostomatology. In 1989 he introduced in Italy the innovative surgical technique of vector tip rhinoplasty, developed by John B. Tebbetts in Dallas. In 1994 Dr. Gottarelli was awarded first prize at the National Congress of Plastic Videosurgery (Italian Hospital Surgeons Association). In 1997 he developed modified inferior turbinoplasty, and the technique has since been employed in 4000 reported cases. From 1998 onward, he has frequently been invited to give lessons on MIT at congresses in Italy and elsewhere around the world (e.g., Trieste, Dubrovnik, Barcelona, Guadalajara). He has also given university courses in Ferrara, Bologna, and Urbino. Since 1991 Dr. Gottarelli has been interested in the applications of computer technologies to plastic surgery.