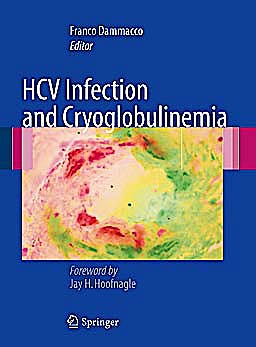 enfermedades infecciosasoncologíahematologíareumatologíamicrobiología clínica
ABOUT THIS BOOK

In 1947 Lerner and Watson showed cold-precipitable proteins to be gammaglobulins and called them ‘cryoglobulins’ and the corresponding clinical condition ‘cryoglobulinemia’. Meltzer and Franklin in 1966 provided an accurate description of the typical clinical symptoms associated with cryoglobulinemia, showed that they consisted of two different globulin components and, because of the ignorance on its etiology, called this clinical condition ‘essential mixed cryoglobulinemia’. For almost 20 years progress has been rather slow in this field, but when at the end of the ‘80s it finally became possible to detect the occurrence in the serum of antibodies to the hepatitis C virus (HCV), many groups in Europe and the United States almost simultaneously reported that a high proportion of ‘essential’ cryoglobulinemias are in fact associated with HCV infection. This hallmark has resulted in a new impetus and great enthusiasm in carrying out new researches made possible by the awareness that cryoglobulinemia is to be considered an undisputable extrahepatic manifestation of HCV infection.

This book is indeed unique in the detail of its presentation, its completeness and its fundamental approach to the subject. The most qualified authors have been invited to contribute critical articles reviewing significant developments related to each of the sections in which the whole treatment has been divided.

The reader will appreciate the immediacy of style, the striking illustrations, and the color plates. In addition, the comprehensive review of a systemic disease such as cryoglobulinemia will interest basic scientists and specialists involved in several disciplines, including internal medicine, hepatology, hematology, oncology, infectious diseases, rheumatology, nephrology and dermatology. General practitioners, graduate and post-graduate students will also find in this book an irreplaceable source of update in this fascinating field.