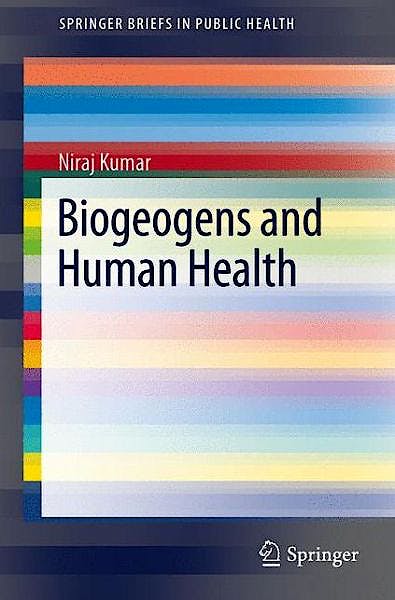 Health of the people is the most important indicator of the development of a nation. Health is a state of complete physical, mental and social well being and not merely the absence of disease or infirmity (as defined by WHO). The state of health of an individual or population depends upon complex interaction of the physical, biological, political and social domains. The environment affects the human health in a big way. People tend to be most susceptible to illness when physically or mentally stressed. Stress, energy and immunity form a closely knit network.

Through his experimental findings, the author has brought out this intricate concept of interdependence of biotic (living) and abiotic (non-living) factors in an ecosystem, resulting in an impact on human health, in an explicitly marvelous manner. As a result, a new word “Biogeogens” has been coined, “bio” for living (biotic) , “geo” for non-living (abiotic/geographical/climatic/environment) and “gens” for the interactive proceeds of the two. The content included herein is directly concerned with the societal health and gives a clue to many socio-psycho health problems presently not handled with care. It also defines a multidimensional approach for dealing with many psychosomatic and health problems.

Dr. Niraj Kumar has an outstanding academic record. He is M.Sc. 1st Class and 2nd position in Zoology in 1984, and D.Phil. both from Allahabad University. Dr. Kumar is Founder Fellow of the Institute of Applied Sciences and the Institute of Rural Health Research and Development, Allahabad. He is also the fellow of Society for Life Sciences, Satna, Madhya Pradesh. Dr Niraj Kumar’s work is legendry in nutritional toxicity. In addition, he worked on the low cost nutritional food for the masses. These pre-packaged food items have become very popular and currently undergoing commercialization at the community level. Dr. Kumar also has deep interest on the indigenous plants as remedies for common illnesses, and organizes workshops on “Health and Hygiene” and “Immunization” against childhood diseases. His work on the nutritional food and medicinal plants has attracted the attention of UNESCO. Dr. Kumar is very active in the Science Communication Program of the Academy inculcating scientific temper in the school going children. He is currently Executive Secretary of the India’s oldest science academy - The National Academy of Sciences, India. From: Dr. V.P. Sharma D.Phil, D.Sc, FNA, FNASc, FASc, FAMS, FTWAS Founder Director, National Institute of Malaria Research NASI-ICMR Chair in Public Health Research, CRDT-IIT Delhi