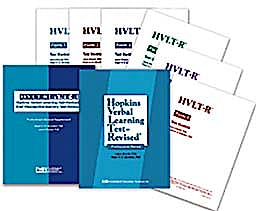 THE HVLT-R offers a brief assessment of verbal learning and memory (recognition and recall) for individuals 16 years and older. It is easy to administer and score and is well-tolerated even by significantly impaired individuals. Its use has been validated with brain-disordered populations (e.g., Alzheimer's disease, Huntington's disease, amnestic disorders).

The Professional Manual provides information on administration and scoring, interpretation (including four case examples), development and psychometric characteristics, reliability, and validity of the instrument. Raw score to T-score conversions by age group are provided in the Appendix.

Six distinct forms of the HVLT-R are available, eliminating practice effects on repeated administrations. Each form consists of a list of 12 nouns (targets) with four words drawn from each of three semantic categories. The semantic categories differ across the six forms, but the forms are very similar in their psychometric properties. Each form is printed in a different color.

The HVLT-R tasks include three learning trials, a delayed recall trial (20-25 minute delay), and a yes/no delayed recognition trial. This latter trial consists of a randomized list that includes the 12 target words and 12 nontarget words, six of which are drawn from the same semantic categories as the targets. Raw scores are derived for Total Recall, Delayed Recall, Retention (% retained), and a Recognition Discrimination Index.

The HVLT-R has high test-retest reliability, and its construct, concurrent, and discriminant validity have been well established. The normative sample included 1,179 community residents (300 men, 879 women), who reported being free of neurological or psychiatric disorders. Their ages ranged from 16-92 years (M = 59 years), and their educational backgrounds ranged from 2-20 years (M = 13.5 years).

Note: The HVLT-R is administered by reading the words aloud, then asking the individual to verbally repeat the list of words (immediately and after a delay) and to identify the words from the list from a verbal presentation (including both the target words and the distractors). It includes a new delayed recall trial and a larger normative sample than the HVLT.