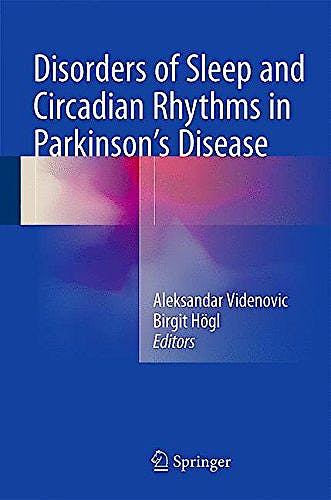 Disorders of Sleep and Wake in Parkinson's Disease

Impaired sleep and alertness is a major non-motor manifestation of Parkinson's disease (PD). Sleep dysfunction, which affects up to 90% of patients with Parkinson's disease, remains under-reported by patients and under-diagnosed by physicians and health professionals. Recently, sleep dysfunction has increasingly been recognized as a risk factor for development of Parkinson's disease. Disorders of Sleep and Wake in Parkinson's Disease is the first book to take into account the rapidly accumulating knowledge related the interface of sleep and PD. With contributions from internationally recognized experts, the book is a single source of in-depth information on sleep and circadian dysregulation in Parkinson's disease. It is divided into two parts: the first comprises chapters summarizing normal sleep-wake homeostasis, followed by changes that occur in PD and discussions of available tools for the assessment of sleep-wake cycles in PD. In the second part, sleep and circadian disorders associated with PD are being described in individual chapters, including sections on epidemiology, etiology, pathogenesis, differential diagnosis, and treatment. Controversies in the field, such as the interface of cognition and sleep, fatigue and sleepiness, as well as the potential impact of surgical therapies on sleep-wake cycles will be discussed separately. The book concludes with a chapter on future directions and unmet needs in the field of sleep, circadian biology and PD. This comprehensive text is readily accessible to both clinicians and researchers and addresses neurologists, sleep and movement disorders specialists, and all trainees as well as allied health professionals involved in the care of patients affected by Parkinson's Disease.

Dr. Aleksandar Videnovic is Assistant Professor of Neurology at Northwestern University Feinberg School of Medicine in Chicago, USA. His clinical and research expertise is in Parkinson's Disease and movement disorders and in Sleep Medicine. Dr. Videnovic's research has been focused on sleep dysfunctions in movement disorders with an emphasis on Parkinson's disease. His research is supported by the United States National Institute of Health, the American Academy of Neurology Foundation, the Michael J. Fox Foundation for Parkinson Research, and the National Parkinson Foundation. Dr. Birgit Högl is Professor of Neurology at Innsbruck Medical University in Innsbruck, Austria. She is a world-renowned expert in the field of Sleep Medicine. Professor Högl has authored many landmark studies related to the interface of sleep and movement disorders, in particular Parkinson's disease, REM Sleep Behavior Disorder and Restless Legs Syndrome.