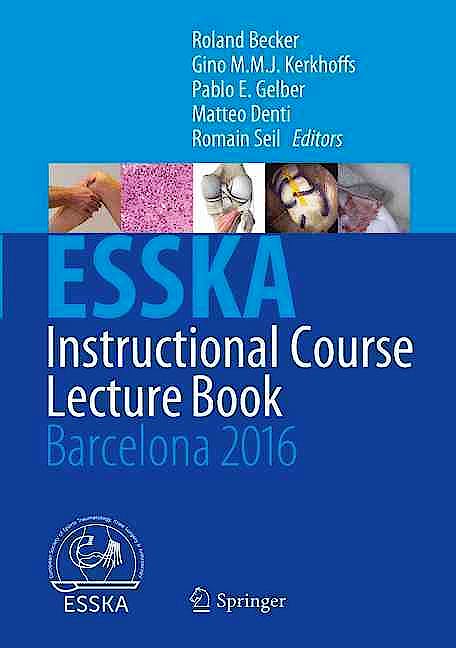 This book, comprising the Instructional Course Lectures delivered at the 17th ESSKA Congress in Barcelona in 2016, provides an excellent update on current scientific and clinical knowledge in the field of Orthopaedics and Sports Traumatology. A variety of interesting and controversial topics relating to the shoulder, elbow, hip, knee, and foot are addressed, all of which are very relevant to the daily practice of orthopaedic surgeons. The coverage includes a number of open questions, such as: How should complications be handled during rotator cuff surgery? What errors may occur during anterior cruciate ligament surgery? How much attention must be paid to meniscal root tears?  Do we now understand the pathology of osteoarthritis sufficiently well and do we always identify the most successful treatment for our patients? All of the contributions are written by well-known experts from across the world. The presentations will enable the reader to gain a better understanding of pathologies and may permit more individualized treatment of patients. The book will be of interest to clinicians and researchers alike.

Roland Becker, MD, PhD, is Professor in Orthopaedic and Sports Traumatology at Otto-von-Guericke University, Magdeburg, Germany. Since May 2005 he has been Head of the Department of Orthopaedics and Traumatology at the City Hospital Brandenburg. He is current President of the European Knee Associates of ESSKA (EKA) and is a board member of ESSKA. He is also a Past President of the Arbeitsgemeinschaft für Arthroskopie (AGA: Association of Arthroscopy). Dr. Becker is Deputy Editor of Knee Surgery, Sports Traumatology, Arthroscopy. He is the author of 75 papers in peer-reviewed journals and has delivered more than 350 oral presentations.
Matteo Denti, MD, has been a Professor in Knee and Shoulder Surgery at the Orthopaedic Medical School, University of Milan, since 1988. He is currently Co-Chairman of the Knee Surgery and Sports Traumatology Unit at the Humanitas Institute, Milan, prior to which he was Chief of the Sports Traumatology and Arthroscopic Surgery Unit at the Galeazzi Institute, Milan. Dr. Denti is the current President of ESSKA and has also served a term as President of SIGASCOT. He specializes in disorders of the shoulder and knee and is the author of 124 scientific papers published in Italian and international orthopaedic journals.

Pablo E. Gelber Ghertner, MD, PhD, is an Associate Professor in the Department of Orthopaedic Surgery at the Autonomous University of Barcelona, Spain. He completed his doctoral thesis in the Surgery Department of the Autonomous University of Barcelona in 2007 and subsequently was awarded a Dr. Freddie Fu Fellowship in Sport Medicine (2010) and an ESSKA-SLARD Arthroscopy Travelling Fellowship (2011). Dr. Gelber is Chairman of the Scientific Committee of the ESSKA 2016 Meeting and is also a board member of the Asociación Española de Artroscopia (AEA: Spanish Association of Arthroscopy). He is the author of more than 30 publications in indexed journals.Gino M.M.J. Kerkhoffs is Professor of Orthopaedic surgery and Sports Traumatology, University of Amsterdam, Amsterdam, the Netherlands, and an orthopaedic surgeon in the Department of Orthopaedic Surgery, Academic Medical Center, Amsterdam. Dr. Kerkhoffs is current President of the Dutch Arthroscopy Association (NVA) and Scientific Chairman of the 16th, 17th, and 18th ESSKA congresses. He has also served as Chairman of the ESSKA Sports Committee (2010–2012) and Secretary-General of ESSKA-AFAS (2010–2014). He has been an Associate Editor of Knee Surgery, Sports Traumatology, Arthroscopy since 2010 and is the author of more than 110 articles in journals indexed in PubMed.