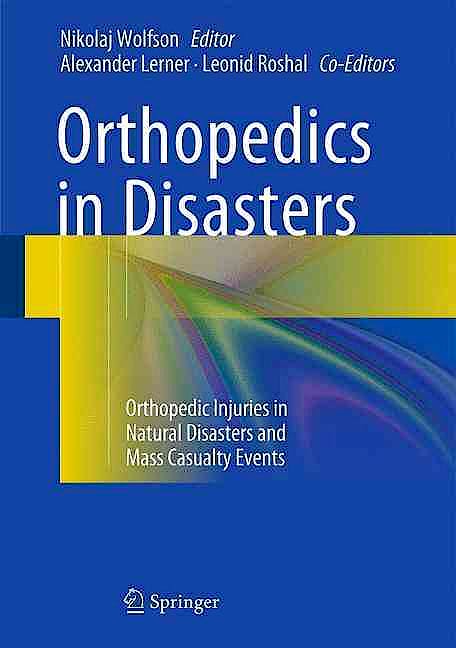 This book is the first to address specifically the mechanisms and treatment of orthopedic injuries due to natural disasters and other mass casualty events. Casualty management is discussed in a range of contexts, from earthquakes and tsunamis to terror attacks and combat situations. Organizational aspects are addressed, general treatment principles are documented, and the management of a variety of orthopedic injuries is described with the aid of numerous illustrations. The book will serve as an invaluable source of practical knowledge for a broad spectrum of medical and other staff, including emergency personnel, orthopedic and trauma surgeons, general practitioners, medical students, and professionals working for the military, government bodies, and NGOs.

Nikolaj Wolfson, MD, FRCSC, FACS, is an orthopaedic surgeon practicing in San Francisco, California. He studied at the Sackler Medical School, Tel Aviv University, before completing his residency at the Division of Orthopedic Surgery, University of Western Ontario and a fellowship at the Division of Orthopedics, St. Michael's Hospital, University of Toronto. After serving as Associate Clinical Professor of Orthopedic Surgery at West Virginia University, he became Assistant Professor in Orthopedics, Orthopedic Trauma, at the Keck School of Medicine of the University of Southern California. Dr. Wolfson is a visiting fellow at the California Institute of Technology in Pasadena, California. Dr. Wolfson has volunteered his time and expertise in natural disaster response around the world, including in Haiti following the 2010 earthquake. He is Director – Natural Disaster at SICOT, the world’s largest international orthopedic organization, and has also been a member of SICOT’s Trauma Committee since 2008.