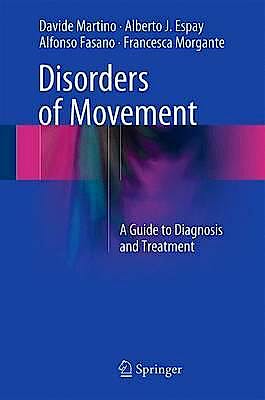 Disorders of Movement. A Guide to Diagnosis and Treatment

This concise but comprehensive book will help interested readers in the health care professions to navigate their way through the jungle of movement disorders, including the potentially complex differential diagnosis and management. The different disorders are discussed in individual sections that explain how to examine the patient and recognize the disorder from its basic phenomenology, how to confirm a diagnosis, how to distinguish a particular disorder from related conditions, and how to treat each disorder effectively. The book makes liberal use of diagrams, algorithms, tables, summary boxes, and illustrations to facilitate solution of clinical problems at the bedside and to solidify previously learned clinical and therapeutic concepts. It will be of interest to a broad audience of health professionals, scientists, and medical students.

Dr. Davide Martino, MD, PhD is a Consultant Neurologist at the Centre of Excellence for Parkinson's and Movement Disorders and Honorary Senior Lecturer at King's College London Hospitals since 2013. He qualified as Specialist Neurologist at the University of Bari, Italy, in 2004 where he also completed a PhD in Clinical Neuroscience in 2008, following which he held a post-doctoral researcher position at the same University. He completed a fellowship in Movement Disorders at the Institute of Neurology, University College London in Queen Square (2003-2006). He has been a recipient and collaborator on several national and international grant project awards from different funding bodies, amongst which the NIHR of NHS England, EU-Framework Project 7, Parkinson's UK, and the Italian Ministry of University and Research. His research activity has focussed on epidemiology and pathophysiology of dystonia, Tourette's syndrome (with a special focus on the role of environmental factors and immunity), functional movement disorders and drug-induced movement disorders. He is a co-founder of the European Society for the Study of Tourette Syndrome (ESSTS) and member of the MDS Study Group for non-motor symptoms in Parkinson's Disease, and has co-authored more than 110 peer-reviewed articles on international journals, book chapters and books. In particularly, he is co-editor with J. Leckman of an influential monography on Tourette syndrome (2013) and has co-edited with A. Cavanna a volume on Neuropharmacology of Tourette syndrome. He regularly lectures at international conferences of neurological societies including the Movement Disorders Society and the European Academy of Neurology.

Dr. Alberto Espay is Associate Professor and Endowed Chair of the James J and Joan A Gardner Center for Parkinson's disease at the University of Cincinnati. He has co-written three other books, including Common Movement Disorders Pitfalls (Highly Commended BMA Medical Book Award, 2013). Dr. Espay has received the Dean's Scholar in Clinical Research Award (2006-09), the Dystonia Coalition Career Development Award (2010-2012), the NIH-funded KL2 Research Scholars Mentored Award (2010-12), and the NIH-funded K23 Career Development Award (2011-16). He currently serves as Chair of the Technology Task Force (2014-2016), Chair of the Membership and Public Relations Committee of the International Parkinson and Movement Disorders Society (2013- 2015), and Chair of the Movement Disorders Section of the American Academy of Neurology (2014-2016). He became honorary member of the Mexican Academy of Neurology in 2008, joined the Best Doctors in America list in 2009, received the Business Courier's Forty Under 40 award in 2010, and the Patients' Choice and Compassionate Doctor awards in 2011.

Dr. Fasano is an Associate Professor of Medicine in the Division of Neurology at the University of Toronto. He graduated from the Faculty of Medicine and Surgery at the Catholic University of Rome, Italy, in 2002 and completed a Neurology residency in 2007. After a two-year fellowship at the Department of Neurology of the University of Kiel in Germany he completed the PhD in neuroscience in Rome, where he returned to be on staff at the Gemelli Hospital. In 2013 he joined the Movement Disorder Centre at the Toronto Western Hospital, where is currently responsible of the surgical program for movement disorders. Dr. Fasano's academic interests are in the areas of advanced management of movement disorders, particularly deep brain stimulation for Parkinson's disease, dystonia and tremor. He is also interested in the pathophysiology of abnormalities of gait, posture and stability. He has published more than 130 peer-reviewed papers, book chapters and books. He has served as editorial board member of Movement Disorders Journal (2009-2013) and presently serves as associate editor of PlosOne. He has been part of Scientific Issues Committee of the International Parkinson and Movement Disorder Society (2015-2017) and is presently part of the Publications Oversight Committee. He is one of the organizers of the Knowledge Gaps in Parkinson's disease and other movement disorders congress.