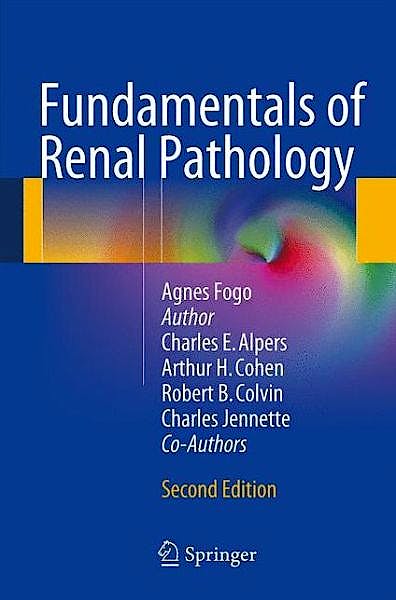 Fundamentals of Renal Pathology is a compact and up-to-date resource on the basics of renal pathology that will be of particular value to residents and fellows in training in renal pathology, general pathology, and nephrology, but will also serve as a handy reference for the more experienced.

This second, revised and updated edition of the book offers an integrated approach based on contributions from established experts in the field. After considering normal renal anatomy and basic concepts and methods used in the assessment of renal biopsies, key diseases are discussed within the context of clinical presentations. The emphasis is on clinicopathological correlation and differential diagnosis. Topics discussed include glomerular diseases with nephrotic or nephritic syndrome presentations; systemic and vascular diseases affecting the kidney, including diseases affecting the renal transplant; tubulointerstitial diseases; and plasma cell dyscrasias and associated diseases. Well-chosen color illustrations and electron micrographs enhance and complement the text, and tables summarize the most up-to-date classifications and approaches for the various disease entities.

Agnes B. Fogo, M.D., is Professor in the Department of Pathology, Vanderbilt University Medical Center, Nashville, TN, and Director of the Renal and Electron Microscopy Laboratory at the Center. Since 2009 she has also been the John L. Shapiro Endowed Chair of Pathology. Dr. Fogo has been the recipient of various honors and awards. From 2005 to 2007, she was Honorary Professor at Fudan University, Shanghai, China and she is an Honorary Member of the Italian Society of Nephrology and the South African Renal Association. In 2011 she received the Robert G. Narins Award for meritorious contributions to teaching, from the American Society of Nephrology. Dr. Fogo has sat on numerous National Institute of Health Review Committees. She has long been a member of the editorial boards of Kidney International and Human Pathology and has authored some 170 articles in refereed journals.

Charles E. Alpers, M.D., is Professor and Vice-Chair of the Department of Pathology at the University of Washington School of Medicine, Seattle, WA. Dr. Alpers is a member of the editorial boards of many leading journals, including the Journal of Nephrology, Human Pathology, and the International Journal of Clinical and Experimental Pathology. In 2003 he was awarded the Jacob Churg Award by the Renal Pathology Society. He is the author of ca. 250 papers in refereed journals as well as numerous book chapters, editorials, and reviews.

Arthur H. Cohen, M.D., has been Professor of Pathology (Cedars-Sinai Professorial Series) at the Department of Pathology and Laboratory Medicine, Cedars-Sinai Medical Center, Los Angeles, CA, since 2008. He has also been Professor of Pathology in Residence at the UCLA School of Medicine since 1985. Dr. Cohen is a member of the editorial board of the Clinical Journal of the American Society of Nephrology and served on the editorial board of Modern Pathology for almost 20 years. In 2005 he received the Jacob Churg Award from the Renal Pathology Society. He is the author of 135 articles in peer-reviewed journals.

J. Charles Jennette, M.D., is Kenneth M. Brinkhous Distinguished Professor and Chair of Pathology and Laboratory Medicine and Professor of Medicine at the School of Medicine, University of North Carolina at Chapel Hill, NC. Dr. Jennette has received numerous honors and awards, and from 2008 to 2010 served as President of the Association of Pathology Chairs. Since 2000 he has been an Ambassador for the United States and Canadian Academy of Pathology. He has authored 17 books, 107 book chapters, and 245 articles in referred journals.

Robert Barnes Colvin, M.D., has been Benjamin Castleman Distinguished Professor of Pathology at Harvard Medical School since 2007, having previously been Benjamin Castleman Professor of Pathology since 1993. Over the past 30 years Dr. Colvin has served on various international, national, and regional committees, and in 2011 he received a Lifetime Achievement Award from the Renal Pathology Society. He has been a member of the editorial boards of various journals and since 2007 has been Associate Editor of the Journal of the American Society of Nephrology. He is the author of almost 280 original reports.