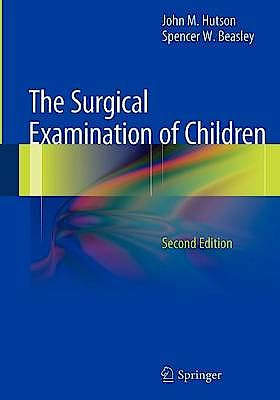 The Surgical Examination of Children

This book demonstrates clearly how to perform a clinical examination in the infant or child with a surgical condition. While most textbooks of pediatric surgery focus on the pathological classification and overall management of disease, in clinical practice physicians and surgeons usually use a problem-oriented approach to clinical diagnosis. Surprisingly, this is rarely taught to students. The authors attempt to redress this imbalance by providing a clinical approach to the patient which can be learned with a minimum of factual information. The book should therefore remain useful to the practitioner throughout his or her medical career. It includes detailed coverage of the usual presentations of common diseases, but does not attempt to cover all aspects of the presentations of uncommon diseases unless their recognition is important for the well-being or survival of the child. Generously illustrated, this is a book for all who are learning the art of pediatric surgical diagnosis.

From the reviews of the second edition: "This is a small, pleasant ... simple book that covers, in a meandering sort of way, what the title describes -- examination of children with surgical problems. ... Each chapter concludes with some 'golden rules' and a list of further readings. ... concluding 'golden rules' summarize major points for each chapter and are excellent for beginners in pediatric care. Overall, this is a pleasant read, a reminder of lessons learned long ago, and a good primer for novices in the field of childhood surgical care." (Robert M. Arensman, Doody's Review Service, February, 2013)

General Principles.- Is the Baby Normal.- Abdominal Pain: Is it Appendicitis.- Inguinoscrotal Lesions.- Abnormalities of The Penis.- The Umbilicus.- Non Bile-Stained Vomiting in Infancy.- Colic.- The Neck.- The Head and Face.- The Mouth.- Trauma.- The Limbs.- Urinary Tract Symptoms.- Abdominal Masses.- Gastro-Intestinal Bleeding.- Jaundice.- Spina Bifida.- Abnormalities of the Chest Wall and Breast.- Respiratory Distress in the Newborn.- Neonatal Bowel Obstruction.- Ambiguous Genitalia: Is it a Boy or a Girl.

John M. Hutson, MB, BS, MD(Hons.1), MD (Monash), FRACS (Paediatric Surgery), MD, DSc (Melb.),FAAP(Hon), qualified from Monash University Medical School in 1972 and went on to specialize in paediatric surgery, ultimately becoming Professor and Director of the Department of General Surgery at the Royal Children's Hospital, Victoria, Australia in 1994. He currently holds the Chair of Paediatric Surgery at the Department of Paediatrics, University of Melbourne. Dr. Hutson has special expertise in paediatric urology and the surgical management of patients with disorders of sex development, and leads the Centre for Early Sexual Development at the Royal Children's Hospital, which is the major referral centre for Southern Australia and New Zealand. In addition to his clinical work, Dr. Hutson has undertaken a great deal of research, and in 2006 won the Royal Australasian College of Surgeons Research Prize. His research interests include the regulation of testicular descent, postnatal germ cell regulation, inguinal hernia closure, the VATER association, and colonic dysmotility. He is the Editor (Australasia) for Pediatric Surgery International, Associate Editor for the Journal of Pediatric Surgery He is the author of over 300 original papers in refereed journals as well as numerous review articles, and is the author or editor of 15 previous books. In 2007, Dr. Hutson was appointed an Officer of the Order of Australia (AO). Spencer W. Beasley, MB ChB, MS, FRACS, is Clinical Professor of Paediatrics and Surgery at the Christchurch School of Medicine and Health Sciences, University of Otago and Clinical Director of the Department of Paediatric Surgery, Christchurch Hospital, Christchurch, New Zealand from where he provides a regional paediatric surgical service to the whole of the South Island of New Zealand. He also runs an active research unit. Dr. Beasley gained his MB ChB from the University of Otago in 1976 and in 1988 became a Master of Surgery at the University of Melbourne. He subsequently worked as a Consultant Paediatric Surgeon at the Royal Children's Hospital in Melbourne, Australia, before accepting his current positions in 1996. Dr. Beasley has been the recipient of various prizes, including the GJ Royal Memorial Medal and the John Mitchell Crouch Fellowship from the Royal Australasian College of Surgeons. He was President of the New Zealand Society of Paediatric Surgeons from 1996 to 2004 and President of the Australasian Association of Paediatric Surgeons from 2005-2007. He has been the Chairman of the Board of Paediatric Surgery, Chairman of the Royal Australasian College of Surgeons Board of Surgical Education and Training, and senior examiner in paediatric surgery. Currently he is the Chair of the Court of Examiners and a Councillor of the Royal Australasian College of Surgeons. He has also held a wide variety of positions in other international paediatric surgical organizations.Dr. Beasley has been Editor of the Journal of Paediatrics and Child Health since 1998, an Editorial Consultant for Pediatric Surgery International and J Pediatric Surgery and is section editor (paediatric surgery) for the Australia and New Zealand Journal of Surgery. He has written or edited a number of major books and has authored more than 300 articles in peer-reviewed journals, as well as numerous book chapters and editorials.