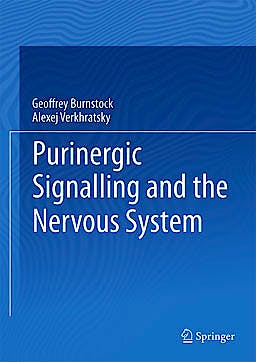 Purinergic Signalling and the Nervous System

In the first 20 years that followed the purinergic signalling hypothesis in 1972, most scientists were sceptical about its validity, largely because ATP was so well established as an intracellular molecule involved in cell biochemistry and it seemed unlikely that such a ubiquitous molecule would act as an extracellular signalling molecule. However, after the receptors for ATP and adenosine were cloned and characterized in the early 1990s and ATP was established as a synaptic transmitter in the brain and sympathetic ganglia, the tide turned. More recently it has become clear that ATP is involved in long-term (trophic) signalling in cell proliferation, differentiation and death, in development and regeneration, as well as in short-term signalling in neurotransmission and secretion. Also, important papers have been published showing the molecular structure of P2X receptors in primitive animals like Amoeba and Schistosoma, as well as green algae. This has led to the recognition of the widespread nature of the purinergic signalling system in most cell types and to a rapid expansion of the field, including studies of the pathophysiology as well as physiology and exploration of the therapeutic potential of purinergic agents.