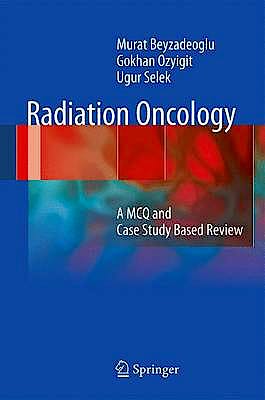 Radiation Oncology. a Mcq and Case Study Based Review

This book, arranged in an MCQ format complemented by oral exam questions, is designed to meet the needs of a wide range of examinees. Essential aspects of radiation physics, radiobiology, and clinical radiation oncology are well covered. Tumors at different sites are addressed in a series of individual chapters, and further chapters are devoted to lymphomas and total body irradiation, pediatric tumors, and rare tumors and benign diseases. The answer keys provide clear explanations for both the correct answers and incorrect statements.

Murat Beyzadeoglu graduated from Cerrahpaşa Medical School at the University of Istanbul before going on to specialize in radiation oncology. He worked for 3 years at the Department of Clinical Oncology at the Royal Marsden Hospital, London and then became an Assistant Professor at Gulhane Military Medical School in Ankara. After working as the Turkish National Military Representative at SHAPE Medical Center, Mons, Belgium and the Jules Bordet Cancer Institute in Brussels, he became first Assistant Professor, then Associate Professor, and finally Professor and Chairman in the Department of Radiation Oncology at Gulhane Military Medical School. From 2004 to 2008 he also served as President of the Balkan Military Medical Committee. Professor Beyzadeoglu was the co-editor of a previous Springer book, Basic Radiation Oncology, and has authored numerous articles in peer-reviewed journals and book chapters.

Gökhan Özyigit graduated from Hacettepe University Faculty of Medicine (English Group) in 1996 and then obtained ECFMG Certification in the USA. He later became a Fellow at the Departments of Radiation Oncology at Washington University and University of Texas M.D. Anderson Cancer Center. In 2004 he was appointed Assistant Professor in the Department of Radiation Oncology at Hacettepe University and in 2006 became an Associate Professor there. Dr. Özyigit is on the editorial boards of the International Journal of Hematology and Oncology (as Managing Coordinator), The Open Journal of Breast Cancer, and the Chinese Journal of Clinical Medicine. He is a reviewer or advisor for a number of other journals, co-editor of three previous books, and author of almost 30 publications in peer-reviewed journals.