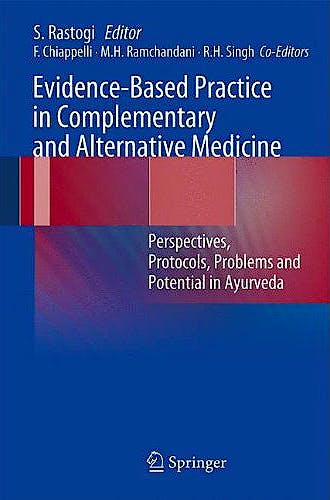 This book investigates the ways in which the evidence base is influencing complementary and alternative medicine in general and Ayurveda and allied health practices in particular. The latter have traditionally been prevalent in Asia and are now increasingly attracting interest worldwide. The book is divided into four sections, the first of which examines issues related to acquisition and evaluation of the evidence base. Evidence-based approaches to Ayurvedic diagnosis and therapy are then examined, with a special focus on management of cardiovascular and rheumatological diseases, dental care, and rejuvenating treatments. The final section explores further the challenges of applying evidence-based practice in contemporary and alternative medicine and Ayurveda with a focus upon the issues requiring urgent attention in ongoing decade. The same involves encompassing areas such as Ayurvedic pharmaceutics, practice, education and research within an evidence-based perspective.

Dr. Sanjeev Rastogi gained his MD in Kaya Chikitsa (Ayurvedic medicine) from Banaras Hindu University, Varanasi and also holds a Diploma in Yoga from the same university and a Certificate in Acupuncture from Tianjin International University of Traditional Chinese Medicine. In addition, he possesses a postgraduate diploma in health and hospital management from IGNOU and an entitlement for green health care leadership from Teleosis Institute, USA. After working as a consultant in Ayurvedic medicine at many prestigious hospitals in India, including Marvari Hindu Hospital, Varanasi and HRKD Hospital, Lucknow, Dr. Rastogi is currently a senior consultant in the State Ayurvedic Services of Uttar Pradesh, India. He is widely known for his exemplary writings and regularly contributes to a variety of national and international journals: he has written more than 30 research papers and is also the author of eight previous books. Dr. Rastogi has been deeply engaged in the reform of Ayurveda to reflect contemporary understanding and is helping to spread Ayurveda globally through his writings and lectures. In recognition of his work, he was awarded a Chinese Government Fellowship in 1998 and a Luisa Kreisberg Family Foundation Scholarship (Teleosis Institute, California) in 2008. In both 2008 and 2009 he received a Consumer Wellness Center Nutritional Grant Award from CWC, Arizona, USA.