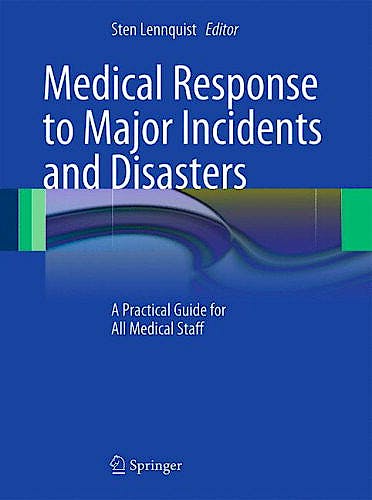 Medical Response to Major Incidents and Disasters. a Practical Guide for All Medical Staff

Disaster medicine is constantly gaining in importance owing to the impact of a variety of trends, including the rising global population, increased levels of travel, increasing production and transport of hazardous material, the development of global terrorism, and the increasing likelihood of disasters due to climatic changes. Additional skills are needed to respond effectively to the emergencies that arise from these developments, yet the available textbooks are mainly theoretical and provide limited practical advice and few methodological guidelines.

This book, written by members of the core faculty responsible for European courses on Medical Response to Major Incidents (MRMI), is designed to redress the balance by providing a practical guide that covers the full range of disaster scenarios and is relevant to all medical staff. It combines within one comprehensive volume, in an easily accessible format, the entire spectrum of knowledge from command and coordination through to the management of individual casualties. Central importance is attached to the key component of decision making by explaining what needs to be done for patients in particular situations and the required order and timing of treatment measures. Simplified methods receive due attention, as it is often necessary for medical staff to administer primary treatment outside of their own specialty. This book will prove an invaluable aid to all who may be involved in the response to major accidents and disasters, including medical and nursing students, ambulance crew, and military personnel as well as medical specialists.

Sten Lennquist, MD, PhD, Professor Emeritus at the University of Linköping, Sweden, is surgeon and former Chief of Surgery, University Hospital, Linköping. His involvement in Disaster Medicine originates from international humanitarian missions as a young surgeon and has been a part of his surgical career. He has served as consultant to the Swedish Board of Health and Welfare in Disaster Preparedness, organised and led numerous national and international courses in Disaster Medicine and also had educational missions in this field for WHO, the EU-commission and several countries in different part of the world. In 1991 he was appointed as the first Professor of Disaster Medicine in Scandinavia and initiated and founded the Center for Research and Education in Disaster Medicine, University of Linköping. He has published more than 200 original articles, chapters and textbooks within the fields of Trauma and Disaster Medicine. He is Honorary Member of the European Society for Trauma and Emergency Surgery where he was President 2007 – 2008, the Scandinavian Surgical Society, the American Association for the Surgery of Trauma, The French Academy of Surgery, the Swedish Society of Disaster Medicine and the Hungarian Society for Military and Disaster Medicine.