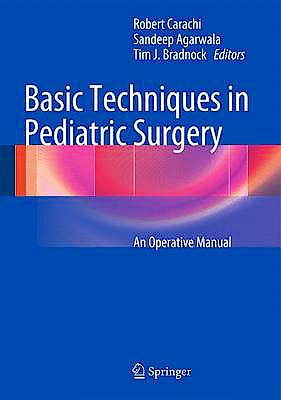 This unique manual is a “surgical cookbook” designed to provide clear and concise guidance for trainees in pediatric surgery. With the aid of simple line drawings depicting each operative step, more than one hundred frequently performed procedures are explained and demonstrated. The reader will learn how to perform each procedure effectively and safely, avoiding potential complications. The full range of surgery is covered, including basic surgical skills, day surgery procedures, emergency surgery procedures and minimally invasive surgery. The book will be of value not only to trainees in pediatric surgery but also to trainees in general surgery, theatre nurses, parents and carers.

Robert Carachi, MD, PhD, FRCS (Glas), FRCS (Eng), FEBPS, is Professor of Surgical Paediatrics at the University of Glasgow and Head of the Department/Section of Surgical Paediatrics at the Royal Hospital for Sick Children, Glasgow, where he has been an Honorary Consultant and a Paediatric and Neonatal Surgeon since 1987. Dr. Carachi holds various other positions, including Clinical Lead for Paediatric Telemedicine and Chairman of the Steering Committee for Scotland, Scottish Centre for Telehealth. He is Editor-in-Chief of the Scottish Medical Journal and an Editorial Consultant to the Journal of Pediatric Surgery, and has been on the editorial board of the European Journal of Paediatric Surgery since 1996. Dr. Carachi is a past President of the Paediatric Surgical Section of the Union of European Medical Specialists (UEMS) and is Chairman of the Exam Board for the European Board of Paediatric Surgery. Since 2007 he has been Director of the Scottish Spina Bifida Association. He is a visiting professor or lecturer in a wide range of overseas countries. He has authored approximately 150 journal articles and a number of book chapters, and is also an editor or author of 11 previous books.