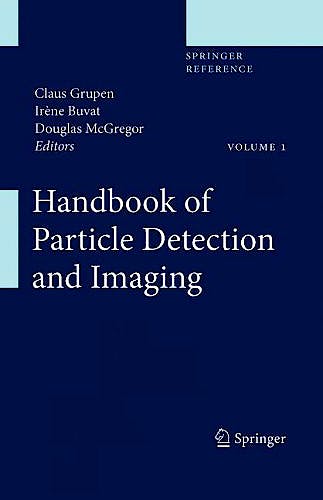 Covers the basics of particle detection mechanisms, as well as the techniques and detectors from the smallest to the largest that are on the market today Provides information on all application fields including nuclear and particle technology, geological dating, space science, medical and life sciences, and radiation protection Richly illustrated and includes imaging and imaging systems The handbook centers on detection techniques in the field of particle physics, medical imaging and related subjects. It is structured into three parts. The first one is dealing with basic ideas of particle detectors, followed by applications of these devices in high energy physics and other fields. In the last part the large field of medical imaging using similar detection techniques is described. The different chapters of the book are written by world experts in their field. Clear instructions on the detection techniques and principles in terms of relevant operation parameters for scientists and graduate students are given.Detailed tables and diagrams will make this a very useful handbook for the application of these techniques in many different fields like physics, medicine, biology and other areas of natural science.

Claus Grupen, Universität Siegen born: September 19th, 1941 in Timmendorfer Strand, Germany Studies of mathematics and physics at the University of Kiel, Germany; degree of a high school teacher in 1966, Ph.D. in physics with research work on ’Electromagnetic Interactions of Cosmic Ray Muons’, University of Kiel 1970, Visiting Fellow of the Royal Society of England, University of Durham. Cooperation with Sir Arnold Wolfendale (later Astronomer Royal) on cosmic ray physics (1971/1972). Spokesperson of a cosmic ray experiment (muon spectra, charge ratio and interactions of muons) at DESY, Hamburg 1972 - 1973. Habilitation at the University of Siegen in physics with a thesis on ’Electromagnetic Interactions of High Energy Cosmic Ray Muons’ (1975) Radiation Officer at Siegen University since 1975; Honorary consultant for the Siegen fire brigade in matters of ’Radiation Safety’ since 1990 Member of the PLUTO-experiment at DESY working on DORIS and PETRA (1974 - 1987) on Electron-Positron Interactions Supernumerary professor of physics at Siegen University since 1978; full professor at Siegen since 1981. Special High Energy and Particle Physics Prize of the European Physical Society for the Discovery of the Gluon in 1979; awarded in 1995 (jointly with members of the JADE, Mark J, PLUTO and TASSO Collaborations) Dean of the physics department at Siegen University 1980/81; 1991 - 1993; and 2002 - 2006. Visiting professor at the University of Tokyo 1981 and 1985, doing cosmic ray work with Prof. Dr. Takashi Kitamura. Member of the ALEPH-Experiment (Electron-Positron Interactions at the world largest e+e− Collider LEP) at CERN (1984 - now). Member of the CosmoALEPH-Experiment (Underground muon physics with the ALEPH detector at CERN; 1990 - now). Member of the KASCADE-Grande and LOPES experiments at the Forschungszentrum Karlsruhe (KIT - Karlsruhe Institute of Technology; 2005 - now) Paid Associate at CERN 1990; 1994, and 2000 working on ALEPH. Director of the ’Research Institute for Humanities and Social Science’ at Siegen University 1999 - 2001 retired: September 30, 2006