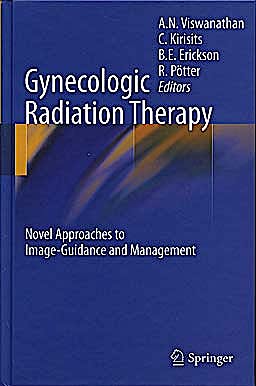 Recent advances in the treatment of gynecologic malignancies led to a new worldwide consensus to introduce image guidance to gynecologic radiation therapy, particularly to brachytherapy. The book summarizes the changed practice of management: treatment planning for cervical cancer, not modified for over 60 years, has been shifted to an image-based approach, endometrial cancer management with an increase in the use of chemotherapy and vaginal brachytherapy, and vaginal cancer therapy including image guidance and high-dose delivery with IMRT.

Akila Viswanathan, M.D., M.P.H. has served as the Chief of Gynecologic Radiation Oncology and Director of the 3D Image-Guided Gynecologic Brachytherapy Program at the Dana-Farber/Brigham and Women’s Cancer Center, Harvard Medical School, since 2002. Dr. Viswanathan completed her undergraduate studies at Harvard University in Cambridge, Massachusetts, and received her medical degree from the University of Pittsburgh School of Medicine. She completed her residency at the Harvard Joint Center for Radiation Therapy and earned both Master’s in Public Health and Master’s of Science in Epidemiology degrees at the Harvard School of Public Health. At the Dana-Farber/Brigham and Women’s, she led the development and growth of the gynecology practice and designed clinical trials of real-time MRI-based image-guided brachytherapy and CT-based imaging for gynecologic cancer patients. She implemented the first use of IMRT techniques at the Dana-Farber/Brigham and Women’s for selected gynecologic cancer patients. In addition to clinical outcomes, Dr. Viswanathan’s research focuses on risk factors and prevention of endometrial cancer, using the Nurses’ Health Study. In 2005 she was awarded a National Institutes of Health K-award to further these research pursuits. She is actively involved in protocol development, serving as principal investigator for an accruing trial, and works with the Radiation Therapy Oncology Group Gynecology Steering Committee to study novel therapeutics in gynecologic cancers. Dr. Viswanathan has lectured widely on gynecologic malignancies and their treatment. Her lectures have brought image-guided brachytherapy and its status in the U.S. to the forefront at local, regional, national and international conferences. She has also led panels, courses and schools for the American Brachytherapy Society and the American Society for Therapeutic Radiology and Oncology, and has served on the board of directors of the American Brachytherapy Society for 3 years. She serves on national and international committees including the Gynecologic Cancer Intergroup and the Gynecologic Cancer Task Force for the National Cancer Institute. Dr. Christian Kirisits studied technical physics at the Vienna University of Technology and graduated 2001 as a Doctor of Technical Science (Dr. techn.). In the same year he got a staff position as medical physicist at the Department of Radiotherapy, Medical University of Vienna after working there as a research fellow before. The main field of research was experimental and Monte Carlo dosimetry for endovascular brachytherapy. After an additional thesis (Habilitation) in Medical Physics he became Associate Professor at the Medical University of Vienna. During the last years he focussed on all aspects of modern brachytherapy, especially image guided approaches for gynaecological radiotherapy. He is a member of the GEC ESTRO committee and working groups of GEC ESTRO (BRAPHYQS -Brachytherapy physics, GYN group). Beside teaching activities at the Medical University he was involved as teacher and organizer at various postgraduate courses including the Endovascular, the GYN, and the Image Guided Radiotherapy teaching course of ESTRO. His most recent appointments include the position as one of the coordinators for the revision of ICRU 38 and the EMBRACE trial. Dr. Erickson is a Professor of Radiation Oncology at the Medical College of Wisconsin. She is a Trustee of the American Board of Radiology and a past-president of the American Brachytherapy Society. She is a fellow of the American College of Radiology and serves as Vice-Chair for the ACR QRRO Cervix Committee, as well as on the ACR Standards and Accreditations Committee. She is a member of the RTOG Gynecologic Committee. Internationally, she has served on the GEC-ESTRO committee, participates in the EMBRACE Trial, and serves as co-chair of the Trans-Atlantic Image-based Brachytherapy Working Group. Richard Pötter MD has been Professor and Head of the Department of Radiotherapy at the Medical University of Vienna/Vienna General Hospital since 1993. After graduation in medicine in Münster, Germany, he became diagnostic radiologist and radiation oncologist. He has been working continuously on imaging in radiotherapy since his “Habilitation” on this topic in 1989. His major clinical oncology areas have been paediatrics, prostate and gynaecology. He was president of the European Brachytherapy Group GEC ESTRO from 1999-2003. Since 2004 he has been coordinator of the European network for 3D image guided gynaecological brachytherapy (GynGECESTRO) where the international study EMBRACE was developed in which he is principal investigator since 2008. Richard Pötter is editor for brachytherapy in the “green” journal and also associate editor in the “blue journal”. He has been chairman of the ESTRO committee for Education since 2006 (ESTRO school). The major focus of his activities in Vienna and abroad during the last decade has been on the development of gynaecologic radiation therapy linking the progress in imaging to the potential of radiotherapy, mainly brachytherapy.