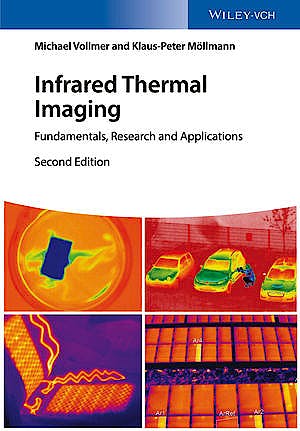 This new up-to-date edition of the successful handbook and ready reference retains the proven concept of the first, covering basic and advanced methods and applications in infrared imaging from two leading expert authors in the field.
All chapters have been completely revised and expanded and a new chapter has been added to reflect recent developments in the field and report on the progress made within the last decade.

In addition there is now an even stronger focus on real-life examples, with 20% more case studies taken from science and industry. For ease of comprehension the text is backed by more than 590 images which include graphic visualizations and more than 300 infrared thermography figures. The latter include many new ones depicting, for example, spectacular views of phenomena in nature, sports, and daily life.

Michael Vollmer received his PhD degree for studies of clusters on surfaces, and his habilitation on optical properties of metal clusters from the University of Heidelberg, Germany. Later assignments were with the University of Kassel, Germany, the university of California in Berkeley, USA, as well as with various institutions in the United States and Asia during sabbaticals. His research interests include atmospheric optics, spectroscopy, infrared thermal imaging, and the didactics of physics. Professor Vollmer has authored one science book and co-authored a scientific monograph and about 230 scientific and didactical papers.

Klaus-Peter Möllmann received his PhD from the Humboldt University of Berlin, Germany, studying strongly doped narrow band semiconductors at low temperatures and later, for his habilitation, MCT photo detectors. He subsequently held positions with the Humboldt University and with several businesses in industry. Professor Möllmann's research interests include MEMS technology, infrared thermal imaging, and spectroscopy. He is the co-author of about 150 scientific and didactical papers.
Both authors are professors of experimental physics at the University of Applied Sciences in Brandenburg, Germany.