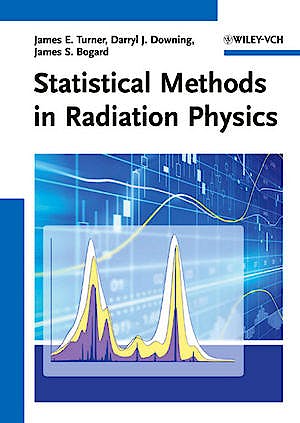 This statistics textbook, with particular emphasis on radiation protection and dosimetry, deals with statistical solutions to problems inherent in health physics measurements and decision making.

The authors begin with a description of our current understanding of the statistical nature of physical processes at the atomic level, including radioactive decay and interactions of radiation with matter. Examples are taken from problems encountered in health physics, and the material is presented such that health physicists and most other nuclear professionals will more readily understand the application of statistical principles in the familiar context of the examples. Problems are presented at the end of each chapter, with solutions to selected problems provided online. In addition, numerous worked examples are included throughout the text.

James S. Bogard is a Senior Health Physicist with Dade Moeller in Oak Ridge, Tennessee, and an Adjunct Professor in the Departments of Nuclear Engineering and Anthropology at the University of Tennessee. He is the author or co-author of over 85 articles, technical reports and presentations, including a workbook of health physics problems and solutions. Dr. Bogard is a past president of the American Academy of Health Physics, a Fellow of the Health Physics Society and a Distinguished Alumnus of Texas State University.

Darryl J. Downing is Vice President, Statistical and Quantitative Sciences, at GlaxoSmithKline Pharmaceutical company. He was previously a member of the research staff at Oak Ridge National Laboratory and led the Statistics Group for 10 of his 20 years at ORNL. Dr. Downing graduated from the University of Florida in 1974 with a Ph.D. in Statistics. He has authored over 50 publications and has been a Fellow of the American Statistical Association since 2002. He is also a member of the International Statistics Institute since 1997 and serves on the editorial board for Pharmaceutical Statistics.

James E. Turner (1930-2008) was a retired Corporate Fellow from Oak Ridge National Laboratory and an Adjunct Professor of Nuclear Engineering at the University of Tennessee. In addition to extensive research and teaching both in the U. S. and abroad, Dr. Turner served on the editorial staffs of several professional journals, including Health Physics and Radiation Research, and was active in a number of scientific organizations. He is a former member of the NCRP, a Past President of the American Academy of Health Physics, and a former Board Member of the Health Physics Society. In 1992 he received the Distinguished Scientific Achievement Award of the Health Physics Society and, in 2000, the William McAdams Outstanding Service Award of the American Board of Health Physics. Dr. Turner published widely in radiation physics and dosimetry and also on the chemical toxicity of metal ions. He is the author of three textbooks.