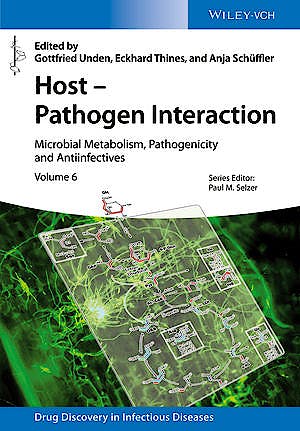 In light of the rapidity increasing incidence rate of bacterial and fungal infections with multi-resistant pathogens, the metabolic changes associated with host-pathogen interactions offer one of the most promising starting points for developing novel antibiotics. . Part one of this comprehensive guide describes the metabolic adaptation of pathogenic microbes in humans, while part two points to routes for the development of novel antibiotics. This is volume six of the book series on drug discovery in infectious diseases by Paul Selzer.

Gottfried Unden studied Biology and Chemistry at the Ludwig Maximilians University Munich where he received his Dr. rer. nat. Since 1993 he is Professor for Microbiology at the Department of Microbiology and Wine Research at the University of Mainz. The main areas of work is bacterial metabolism and its adaptation to changing environmental conditions like switching from aerobic to anaerobic metabolism, or the use of carboxylic acid as the substrate for growth, and the function of bacterial sensors.

Eckhard Thines studied Biology at the University of Kaiserslautern, Germany, where he received his PhD in Biotechnology. As a postdoctoral fellow he spent two years in Professor Nicholas Talbot's laboratory in Exeter, UK. He joined the Institute of Biotechnology and Drug Research (IBWF) in Kaiserslautern, Germany in 2006. Since 2009 he is CSO of the IBWF and since 2012 he is Professor for Biotechnology and Drug Research at the University of Mainz. His research focusses on fungicide research, mode of action research, target identification and validation as well as fungal secondary metabolism. Furthermore he is interested in host/pathogen-interactions in fungal plant diseases, e.g. Esca and grape black rot.

Anja Schüffler studied Biology at the University of Kaiserslautern. Her PhD focused on the characterisation of fungal natural products with antimicrobial activity. In 2010 she joined Professor William Fenical´s group at the Scripps Institute for Oceanography in San Diego, where she studied antibacterial natural products fromstreptomycetes. In 2011 she started a research fellowship at the Institute of Biotechnology and Drug Research (IBWF, Kaiserslautern). Her scientific work focuses on fungal bioactive natural products and assay development, the biosynthesis of secondary metabolites, as well as isolation and taxonomy of fungi.