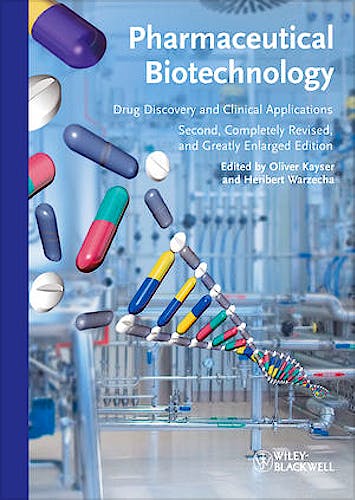 This is the second edition of a very successful book on Pharmaceutical Biotechnology. It is thoroughly updated; existing chapters have been completely re-written and the content has more than doubled from 16 to 36 chapters. As with the first edition, the focus is on industrial pharmaceutical research, written by a team of industry experts from around the world; the second edition does now cover not only biotech drug development but also the use of biopharmaceuticals in diagnostics and vaccinations. The content has been thoroughly updated and greatly expanded (100% more content). As with the previous edition, quality and safety management, drug approval and regulation, patenting issues, and biotechnology fundamentals are covered as well.

Oliver Kayser: Oliver Kayser received his PhD at the Free University Berlin in 1997 following his fellowship at the University of Gainesville, Florida, whereupon he entered the pharmaceutical biotechnology industry. He is currently a lecturer at the Department of Pharmaceutics, Biopharmacy and Biotechnology at the FU Berlin, working on new biotech drugs from natural sources and on the development of drug delivery carriers based on nanosuspension and solid lipid nanoparticle enterprise technologies.

Prof. Dr. Heribert Warzecha
Studied Pharmazie at the Johannes Gutenberg-Universität, Mainz. After completing his Ph.D. in 1998, he worked first as a postdoctoral fellow at Cornell, USA, and become associate Professor in würzburg in 2001. Since 2007 he is full Professor at the technical university of Darmstadt and became dean of the Institute of plant science in 2009.