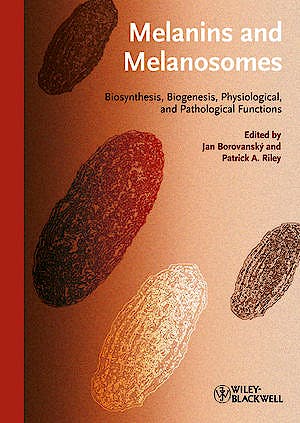 The surface pigmentation of vertebrates is controlled by specialized cells able to synthesize a variety of pigments collectively known as melanins. Recent research has shown that melanins are produced not only in the skin but also in many other sites such as the eye, inner ear, muscles, etc., - where they are engaged in some unanticipated roles. The details of the synthetic pathway, the complexities of its regulation and biological significance that have been unravelled in recent research comprise a fascinating story and are of key importance in understanding the nature of diseases, including malignant melanoma one of the most rapidly spreading cancers.

Patrick Riley was born in Paris in 1935 and was educated in Zurich and at King Edward VII School, King?s Lynn. He graduated from University College Hospital Medical School in 1960 and gained his Ph.D. from the Department of Dermatological Histopathology under Arthur Jarrett. He joined the Department of Claude Rimington and began a series of cellular studies culminating in his appointment to a Chair of Cell Pathology at UCL in 1984. His work covered many fundamental aspects of cell pathology including free radical pathology, cell size control, regulation of cell proliferation and cancer. Patrick Riley was a founder member of the European Society for Pigment Cell Research and the International Federation of Pigment Cell Societies. He was the organiser and Chairman of the XVth International Pigment Cell Conference. He was the recipient of the Myron Gordon Award in 1993 and the Centenary Medal of Charles University. He has published extensively on melanocytes, melanogenesis and melanoma. He was joint Charman with Jan Borovansky of the recent FEBS Symposium on Melanins and Melanogenesis.

Jan Borovansky was born in Prague in 1943. He graduated from Faculty of General Medicine, Charles University in 1966 and gained his Ph.D. in 1976 from the Department of Medical Chemistry and Biochemistry under Professor J. Duchon. From 1970 to 1980 he was Lecturer in Medical Chemistry and Biochemistry. In 1980 he defended his Habilitation Thesis and became Associate Professor at the Charles University, and in 2004 he was appointed a Full Professor of Biochemistry. In 2008 he was elected to the Senate of the 1st Faculty of Medicine, Charles University, Prague. From the outset of his research career he has been involved in biochemical studies of melanosomes, and the enzymes associated with them. He has also published important studies on metal binding by melanins, the cytotoxicity of zinc, and free radical processes in normal and malignant pigment cells. Since 1979 he has been member of the International Pigment Cell Society and following its transformation into European Society for Pigment Cell Research (ESPCR) he was elected to its Council (1990-1998). In 1981 he was General Secretary of the 3rd European Workshop on Melanin Pigmentation and in 1998 he was President of the 8th Meeting of the ESPCR organized in Prague. As a long-standing member of the Editorial Board of Pigment Cell Research (1995-1998) he received a special Certificate of Appreciation from the International Federation of Pigment Cell Societies and Munksgaard in 1999. Since 2000 he has been a member of the International Board of the Pigment Cell Research Bulletin to which he regularly contributes with critical bibliographical reviews concerning melanosomes. He is a member of the Editorial Board of Folia Biologica (Prague) (2006-present) and a member of the Board of Advisors of the American Biographical Institute. He was an Honorary Research Fellow at University College London (1980, 1984) and has been a Visiting Scientist at several other institutions including Sheffield University (1978) and Leiden University Medical Centre (1997). He was the recipient of the Annual award of the Czechoslovak Oncological Society in 1975. Recently, he was appointed a member of the Organizing Committee of the 34th FEBS Meeting held in Prague and was responsible for planning the Symposium on Melanins and Melanogenesis