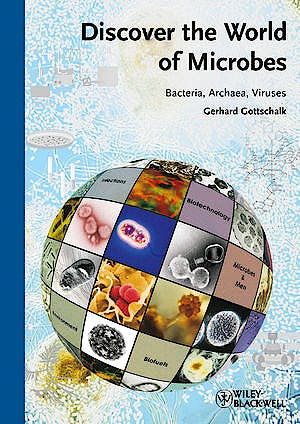 Discover the World of Microbes. Bacteria, Archea, and Viruses

This title is an essential primer for all students who need some background in microbiology and want to become familiar with the universal importance of bacteria for all forms of life. Written by Gerhard Gottschalk, Fellow of the American Academy of Microbiology and one of the most prominent microbiologists in our time, this text covers the topic in its whole breadth and does not only focus on bacteria as pathogens.

The book is written in an easy-to-read, entertaining style but each chapter also contains a `facts' section with compact text and diagrams for easy learning. In addition, more than 40 famous scientists, including several Nobel Prize winners, contributed sections, written specifically for this title. The book comes with color figures and a companion website with questions and answers.

Gerhard Gottschalk studied Chemistry at the Humboldt-University in Berlin. He finished his Ph.D. in Gottingen in 1963 and worked as a Post-Doc from 1964 - 1966 at the Department of Biochemistry at University of California, Berkeley (USA). He became full professor for microbiology in Gottingen in 1970, where he worked until 2003. He was visting professor in UC Davis in 1973 und UC Berkeley in 1979, and was head of the laboratory for Genome analysis at the Institute for Microbiology and Genetics in Gottingen from 1999 to 2007.