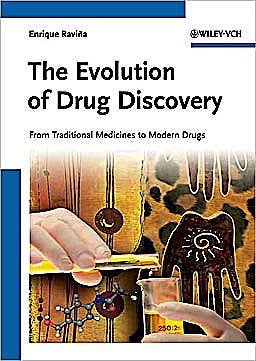 The Evolution of Drug Discovery. from Traditional Medicines to Modern Drugs

Based on his profound knowledge of past and present paradigms in the development of medicines, the author takes the reader from the very beginnings of pharmacology to the multibillion-dollar business it represents today. Recounting the often spectacular successes and failures of innovative drugs as well as the people who discovered them, he brings abstract science to life in anecdotal form.

The book is beautifully illustrated, containing historical photographs of drugs and their discoverers, and abounds with references to the primary literature, listing seminal publications alongside more modern reviews for readers seeking further details.

For anyone with a more than superficial interest in the science of drugs: instructive and enjoyable for a broad audience of students, instructors and professionals in pharmacy, the pharmaceutical chemistry and related fields.

The Evolution of Drug Discovery: From Traditional Medicines to Modern Drugs
The First Synthetic Drugs and the Birth of Chemotheraphy
From Casual Observations to Systematic Search
Nature as a Source of Drugs: Drugs from Natural Products
Rationalizing the Drug Discovery Process
Structure-based Drug Discovery
Biopharmaceuticals
Drug Discovery in the Postgenomic Era: Concluding Remarks

Enrique Ravina studied pharmacy at the University of Santiago de Compostela, Spain, where he obtained his PhD in 1969 and was appointed Professor of Organic Chemistry in 1975. Since 1981 he has been Professor of Medicinal/Pharmaceutical Chemistry. He is a member of the Spanish Royal Academy of Pharmacy, a founding member of the Spanish Society of Medicinal Chemistry and a member of the American Chemical Society. Professor Ravi?a has over 120 publications to his name in the field of chemistry of drugs, especially in the area of antipsychotic and cardiovascular drugs, including two books, as well as the patent ?6-phenyldihydropyrrolopyrimidinedione derivatives?. In 2008, he has published a highly acclaimed book on the history of drugs and their discovery in Spain (published in Spanish language).