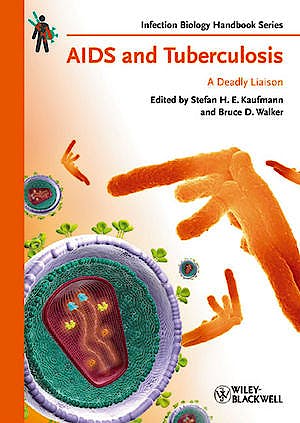 Aids and Tuberculosis. a Deadly Liaison

enfermedades infecciosasmicrobiología clínicamicrobiologíavirologíabacteriología
The immune deficiency AIDS leads to a drastic increase in susceptibility to Tuberculosis. Accordingly, co-infections of tuberculosis (TB) and AIDS have increased dramatically over the last decades and have already killed more than 5 million people worldwide. Currently, no vaccines are available for either of these diseases leaving doctors with limited options for prevention. This perfect storm of pandemics is analysed and explained for the first time in this groundbreaking title, edited by two of the most accomplished experts in this area, Prof. Dr. Dr. h.c. Stefan Kaufmann at the Max-Planck Institute for infectious diseases in Berlin and Prof. Dr. Bruce Walker, director of the Ragon Institute of MGH, MIT and Harvard in Boston.

Co-infection of AIDS and TB occur frequently in the most impoverished regions of the world and the AIDS pandemic which has spread rapidly across Africa over the past two decades is now being met by a TB pandemic.

While TB can be cured and AIDS can be treated, co-infection in a single patient presents unique challenges and the rapid expansion of these two pandemics has resulted in a critical need to better understand the interactions between the two pathogens and to integrate research efforts.

This title brings together scientists from the forefront of research to explore and combine state-of-the-art studies in drug interactions and disease therapies, providing the latest information about prevention, therapy and diagnosis of both tuberculosis and AIDS.

This is the only book to place a clear emphasis on the increasing number of patients suffering from both tuberculosis and AIDS and is unique in combining expertise from both fields. Using a multi-disciplinary approach the authors bring together the issues surrounding treatment of co-infection by highlighting the problems of treatment overlap and providing new data demonstrating exactly how this deadly liaison plays out.

Early chapters focus on immunology and the problems facing vaccination strategies for both diseases. Currently no vaccines exist for either disease and the coexistence of both pathogens in a single patient complicates the research for new preventive, diagnostic or therapeutic approaches.

Later chapters deal with some of the most threatening consequences of this co-infection, such as the emergence of drug resistant TB. These chapters also deal with the need to simultaneously treat both infections, highlighting the major problem of drug interaction if two treatments which have been researched in isolation are given to one individual.

Together the contributing authors offer a refreshingly new and engaging analysis of this most challenging of topics and offer new therapeutic approaches by providing comprehensive understanding of both diseases.

This title is of strong interest to a broad range of research communities, from microbiologists and virologists to immunologists and medical doctors specializing in TB and AIDS treatment as well as to the pharmaceutical and biotechnological Industries.

Aids and Tuberculosis: A Deadly Liaison is the first title in Wiley-Blackwell's new 'Infection Biology Series'. The second title in the series will be Bacterial Virulence: Basic Principles, Models and Global Approaches, edited by Philippe Sansonetti from the Pasteur Institute in Paris. It is due for publication in spring 2010.

Stefan H.E. Kaufmann is the Director of the Department of Immunology at the Max Planck Institute for Infection Biology in Berlin, Germany. Having obtained his academic degrees from the Johannes Gutenberg University in Mainz he spent his time as post-doc at the Max Planck Institute for Immunobiology and later became full Professor for Microbiology and Immunology at the University of Ulm. Professor Kaufmann has authored over 600 scientific publications and has received numerous scientific awards including the Aronson Prize of the State of Berlin, the Smith Kline Beecham Science Prize for Medical Research, the Merckle Research Prize, The Robert Pfleger Prize, The Pettenkofer Prize, The Research Prize of the German Society for Hygiene and Microbiology and the Alfred Krupp Prize for Young Professors. He is also member of the Berlin-Brandenburg Academy of Sciences and the Leopoldina Academy of Natural Sciences and a long-time Editor-in-Chief of the Journal Microbes and Infection.

Dr. Walker is Professor of Medicine at Harvard Medical School and Director of the Center for AIDS Research at Harvard University; Director of the Partners AIDS Research Center at Massachusetts General Hospital; and a Howard Hughes Medical Institute Investigator. He obtained his undergraduate training at the University of Colorado and the Swiss Federal Technical Institute, and graduated from Case Western Reserve University School of Medicine. Following an internship and residency in Internal Medicine at Massachusetts General Hospital and Harvard Medical School, he completed a postdoctoral fellowship in infectious diseases in the laboratory of Dr. Robert T. Schooley, studying the cellular immune response to HIV in infected persons. He now spends the majority of his time in the laboratory studying immune responses in chronic viral infections. His basic science research focuses on cellular immune responses to HIV and hepatitis C virus (HCV). Dr. Walker also continues his work as a clinician with a specialty is infectious disease, focusing on the treatment of persons with HIV/AIDS. In addition, he has been involved in collaborative research in Africa at the University of KwaZulu-Natal in Durban, South Africa, where he helped to establish a state of the art AIDS Research Center to serve sub-Saharan Africa.