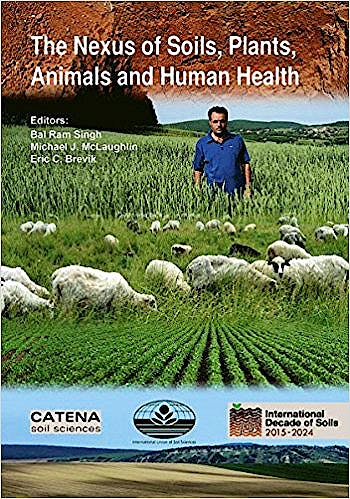 The Nexus of Soils, Plants, Animals and Human Health

The contributions in this book describe the role soils play for plant, animal and human health. They show that soil- and human health are intricately connected, because healthy soils produce healthy crops, which in turn nourish humans and animals, allowing for their health and productivity.

Soil quality directly influences the quality and quantity of food that can be produced, as soils provide essential macro- and micronutrients and attenuate environmental pollutants. On the other hand, these same pollutants, thus concentrated in soils, may cause soils to become toxic and degraded. Soils (and their crops) may also be responsible for exposure to pests and pathogens, while, at the same time, providing drug substances and may even suppress diseases.

Soil quality is vital on a global scale, as more than 800 million people around the world are undernourished, implying that their intake of food is insufficient to meet their daily energy needs, and the deficiency of essential micronutrients is even more widespread. Nearly one third of the world’s population is affected by zinc deficiency, while iron deficiency affects nearly 3 billion people.

Climate change has been shown to affect animal and human health, and soils are intricately linked to the atmosphere by being both a source and sink of greenhouse gases. Soils are the largest active terrestrial reservoir of organic carbon and its sequestration in soils can be enhanced by improved management practices.

The book summarizes the current state of research of these important issues and provides a comprehensive treatise of the global importance of soils to humankind.