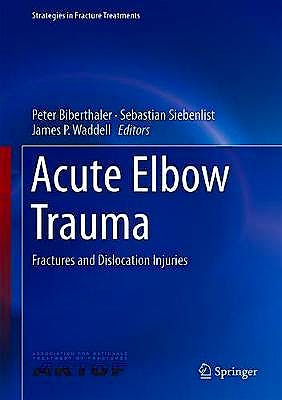 This volume focuses on acute trauma to the adult elbow including fractures, dislocations, tendon ruptures, and vascular and nerve injuries. Each chapter addresses anatomical key features, surgical and conservative therapeutic procedures, postoperative regimes and complication strategies. International elbow experts give the readers information about surgical approaches, the usage of modern implants, advances in surgical techniques, and pearls and pitfalls for each trauma entity. Moreover, total elbow arthroplasty and radial head replacement are described in detail, current clinical outcomes are confronted, and the authors recommend their preferred therapeutic approach and salvage measures if required. This book is a specific manual that enables the orthopedic surgeon to deal with the total spectrum of acute simple and complex elbow injuries in adults.

Peter Biberthaler, MD, is an orthopedic surgeon who studied medicine in the highly respected medical school in Munich. He was trained as an orthopedic surgeon at the University hospital Munich and passed the board exam for surgery 2003. He worked as a senior residence and consultant for trauma surgery and orthopedic surgery from 2004 until 2011. In this period, he developed his favor for the therapy of multiple injured patients as well as highly complex joint fractures. In this respect he developed several innovative surgical techniques and teached these technologies to a broad community of trauma and orthopedic surgeons. Hence, it seemed very likely that the Technical University of Munich decided to announce him as a director of the new introduced Department of trauma surgery at the Klinikum rechts der Isar. In this position as a full professor for trauma and orthopedic surgery, he developed this newly started department within a few years into one of the most successful locations for the therapy of complex trauma cases. Due to his high academic activity and his continuous teaching attitude he carried this knowledge within many ARTOF seminars lectures hands-on workshops and instructional courses far over the frontiers of Germany into the whole world. Actually, in his department patients are treated from all over the world especially in the situation of highly complex joint fractures.

Sebastian N. Siebenlist, MD, is a trauma and orthopedic surgeon who passed his residency at the Orthopedic University hospital in Wurzburg and the Department of Trauma Surgery at the Technical University of Munich. From 2011 to 2015 he worked as consultant for trauma surgery and specialized in elbow and shoulder surgery, completing his professional experience in several national and international fellowships at well-known centers for elbow surgery (among others Prof. Graham J.W. King, Canada). Beside a great number of publications in trauma surgery, he focused his studies on tendon reconstructions around the elbow and developed innovative surgical procedures in this field. He trained colleagues in these technologies in numerous national instructional and hands-on courses and during his own annual Munich Elbow Course.Since 2016 he has been working as senior consultant for elbow and shoulder surgery in the renowned Department of Orthopaedic Sports Medicine at the Technical University of Munich. As assistant professor for orthopedics and trauma surgery he is an active member of various committees of the German Shoulder and Elbow Society (DVSE) and part of the editorial board of the associated OBEX journal. Moreover, he is a full member of the European Society for Surgery of the Shoulder and the Elbow (SECEC) and reviewer for divers international scientific journals. In 2017 he gained a place on the FOCUS-AErzteliste as national specialist for elbow surgery.

Dr. James Waddell graduated from the University of Alberta Medical School. He did his postgraduate training in orthopedic surgery at the University of Toronto and assumed a staff position at St. Michael's Hospital, a fully affiliated hospital with the University of Toronto. He has occupied a number of positions at St. Michael's Hospital including Surgeon-in-Chief and Director of the Trauma Program. He was an examiner for the Royal College of Physicians and Surgeons of Canada for 11 years, the last six as the Chief Examiner in Orthopedics. He was also an examiner for many years for the American Board of Orthopedic Surgery and continues to examine for the SICOT diploma. At the University of Toronto he was appointed the Professor & Chairman of the Division of Orthopedic Surgery, completing a 10 year term in June of 2006. He has also occupied a number of positions in the Canadian Orthopedic Association culminating in the Presidency. He also acted as the Coordinator for the Canadian National Action Network for the Bone and Joint Decade for the 10 years of the decade; he has recently completed a four year term as the Board Chair of the Canadian Orthopedic Foundation. He continues to be in active practice primarily focusing on joint replacement surgery as well as traumatology and is currently the Chair of the Expert Panel for Orthopedic Surgery for the Province of Ontario.