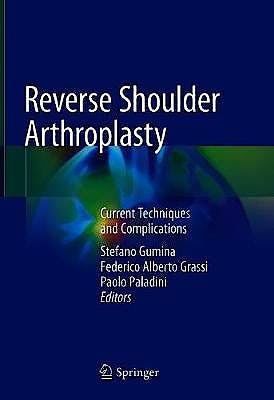 This handbook fully investigates reverse shoulder arthroplasty (RSA), presenting all the recent advances in the field to enable shoulder surgeons to treat patients with complex conditions, such as rotator cuff tears and instability, failed surgery and combined arthritis, or proximal humerus neoplasia.

Reverse shoulder arthroplasty is becoming increasingly common because conventional total shoulder replacement may cause pain, loss of strength, simple or complex disabilities as well as limited motion, reducing general quality of life. The goal of a reverse prosthesis is to restore a painless, biomechanically valid joint. Drawing on the results of recent studies, the book covers all relevant aspects of RSA, including basic science, pathogenesis, clinical and instrumental evaluation, surgical techniques and complication management, helping readers to better understand when and how reverse shoulder arthroplasty should be implanted and what to do in cases of poor results. Written by leading shoulder specialists, the book provides surgeons and rehabilitation specialists, as well as residents and shoulder fellows, with a valuable, state-of-the-art guide for clinical practice.

Stefano Gumina, MD, PhD, is Professor in Orthopedics and Traumatology at the Department of Anatomy, Histology, Legal Medicine and Orthopedics and Traumatology at the Sapienza University of Rome, Italy. Since 2008 he has worked as an orthopedic surgeon, specializing in shoulder surgery, at the same university. . In 2000 and 2001 he spent periods as a fellow at the University of Texas Health Science Center at San Antonio, the Cleveland Clinic Foundation, and the Rush Presbyterian-St Luke's Hospital at Chicago. In 2003 he obtained his doctorate in Physiopathology of the Skeletal Apparatus, focusing his attention on shoulder disorders. Associate Member of the European Society for the Surgery of the Shoulder and Elbow (ESSSE/SECEC) since 1997, he was nominated as an Ordinary Member in 2001. In 2006 he was nominated as a Corresponding Member of the American Shoulder & Elbow Surgeons. His interest in shoulder disorders and surgery dates back to 1990 and is reflected by the publication of numerous papers in Italian and international journals. He is President of the Italian Society of Shoulder and Elbow Surgery (SICSeG).