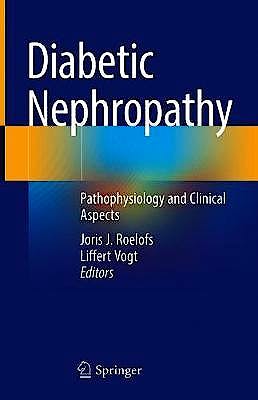 This book provides an overview of the most up-to-date research on diabetic nephropathy and the current understanding of its pathogenesis, clinical features and socio-economic developments. Written by leading experts in the field, it provides a comprehensive synthesis of clinical and pathophysiological aspects from a mechanism-based point of view, and reviews evidence-based treatment modalities for the prevention and management of diabetic nephropathy. In addition, closely related areas such as diabesity, diabetic eye disease and macrovascular involvement in diabetes are addressed.

Diabetic Nephropathy will be of interest for nephrologists, diabetologists, internists, transplant physicians, public health professionals, basic scientists, geneticists, epidemiologists, pathologists, and molecular and cell biologists working in the field of diabetes and its complications.

Joris Roelofs (1972) studied medicine at the KU Leuven, Belgium, and the VUmc School of Medical Sciences, Amsterdam, the Netherlands, where he received his MD degree. He received his PhD degree from the University of Amsterdam Faculty of Medicine with studies on coagulation in renal disease, after which he worked as a Postdoctoral Research Fellow in the Kirkland Center for Lupus Research (Cornell University Medical College, New York City). Joris Roelofs is Associate Professor of Renal Pathology and Principal Investigator in the Department of Pathology at the Academic Medical Center, Amsterdam, where he leads translational studies in chronic kidney disease and diabetic nephropathy.

Liffert Vogt (1975) was born in Groningen in the Netherlands, where he completed his medical degree and nephrology PhD. He then moved to the Mario Negri Institute, Bergamo, Italy where he was an international postdoctoral fellow, and then he completed his internal medicine and nephrology training at the Academic Medical Center, Amsterdam, the Netherlands, where he works now as an internist and nephrologist. As a Principal Investigator in his institute, he is leading experimental and clinical studies within the field of diabetes and chronic kidney disease.