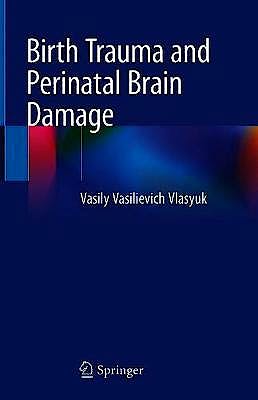 Part I. birth trauma and associated lesions: Brief historical information.- The concept of birth trauma.- Caput succedaneum, area of periosteal stagnation of blood, subaponeurotic hemorrhage.- Cephalohematoma and skull fractures.- An epidural hemorrhage and changes of the Dura mater.- The configuration of the head and displacement of the skull bones.- The configuration of the head and anomalies of the skull.- Head configuration and venous stasis.- Damage to the cerebellar Tentorium. Mechanisms. Patterns. Classification.- Correlations between pathological changes of the skull roof during childbirth and localization of hemorrhages in the tentorium cerebelli in newborns.- Damage the falx cerebry and veins.- Injuries of the spine and spinal cord.- Compression of the skull, brain and increased intracranial pressure.- Damage during obstetric operations.- Obstetric surgery and intracranial lesions.- Other injuries due to birth trauma.- The method of opening the skull and extracting the brain in fetuses and newborns.- Postmortem assessment of labor from changes in the skull and brain in fetuses and newborn infants.- Part II. The main forms of circulatory disorders in the brain and hypoxic-ischemic brain damage: Subdural hemorrhage.- Leptomeningeal (Subtelny and subarachnoid) hemorrhage.- Subependymal and intraventricular hemorrhage.- Hemorrhage in the cerebellum.-Intracerebral hemorrhage.- Periventricular leukomalacia.- Hypoxic-ischemic and other lesions of the brain in children.- The combination and interrelation of the basic forms of violations of cerebral circulation.- Conclusion.

This book focuses on traumatic birth injuries, predominantly of the skull and brain, as well as hemorrhagic and ischemic disorders of cerebral circulation in fetuses and newborns, providing information on each condition's classification, incidence, etiology and pathogenesis, pathomorphology, clinic, diagnostics, prognosis, and complications. It discusses the configuration (molding) of the head, venous congestion, displacements of cranial bones, ruptures of the cerebellar tentorium during labor, and the compression of the skull and brain damage caused by obstetric operations and asynclitic insertion of the head, while also describing the importance of the periosteal stagnation of the skull to assess the delivery and explanation of tentorium tears. Intracranial hemorrhages are considered in detail, taking into account the role of the traumatic factor in their occurrence and hypoxic-ischemic brain lesions (periventricular leukomalacia, selective neuronal necrosis, multicystic encephalomalacia, etc.).

Lastly, it offers the world's first explanation of why tentorium tears occur most frequently in the left half, providing an original classification of damaged tentoria, subarachnoid and intraventricular hemorrhages, and the degree of configuration of the head in childbirth.

Vasily V. Vlasyuk is a doctor of medical sciences, professor, WHO expert, and full member of the European Academy of Natural Sciences. After graduating from the Leningrad Pediatric Institute, he worked as a pediatrician, then as a research fellow at the Institute of Perinatal Medicine, Obstetrics and Gynecology in Georgia, as head of the morphology laboratory at the Institute of Mycoses, Hospital 122 FMBA of Russia, Children's Hospital and at the Institute of Childhood Infections in St. Petersburg. He has worked as a WHO expert on infant mortality in Mongolia, and has personally performed over 5,000 autopsies on fetuses and newborns. His main research interests are the pathology of the central nervous system in fetuses and newborns, birth injury, intracranial hemorrhages, childhood infections, and the role of immunohistochemical studies in morphology. Prof. Vlasyuk is the author of over 230 publications, including seven monographs, and has four patents and one scientific discovery to his credit.