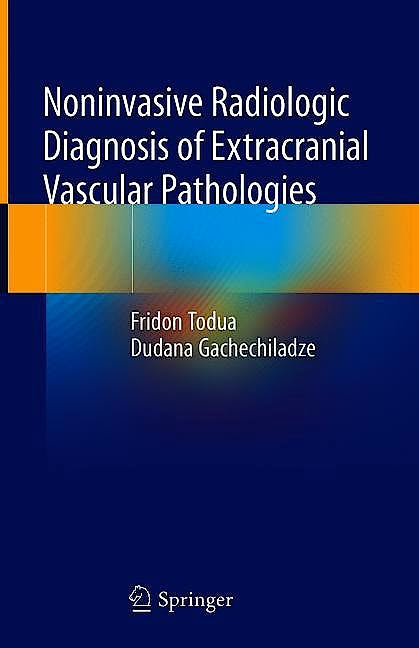 This book is a state of the art guide to the diagnosis of extracranial vascular pathologies with modern noninvasive neuroimaging and vascular imaging techniques. The opening sections provide a thorough introduction to arterial and venous anatomy, basic hemodynamics, and the principles of noninvasive vascular diagnostics, including by means of color Doppler ultrasound, CT and CT angiography (356- and 640-slice systems), and MRI and MR angiography (1.5 and 3 T). The main body of the book is devoted to the use of these methods to image cerebral ischemia and a wide variety of extracranial arterial and venous anomalies and pathologies. Neuroimaging and vascular imaging diagnostic criteria are clearly identified with the aid of many high-quality images, and the advantages and disadvantages of each modality for each pathology are explained. Information is also presented on etiology, pathophysiology, and other relevant aspects. A concluding section discusses the role of complementary noninvasive functional tests. The book will be a valuable resource for neurologists, angiologists, neuroradiologists, neurosurgeons, trainees, and all physicians who care for patients with cerebrovascular diseases.

Fridon Todua, MD, PhD, has been the founder and Scientific Supervisor of the Institute of Clinical Medicine ,Tbilisi, Georgia since 1991. He has been the recipient of numerous honors and awards, including the Chivalrous Order of the Belgian Royal Court (1999), the Albert Schweitzer Medal "For humanism and service to the people" (2003), and the Order of Presidential Excellency (2010). He became Academician of the Georgian Academy of Sciences in 1991 and Academician of the European Academy of Sciences and Art, a member of the Russian Academy of Medical and Technical Sciences as well. Prof. Todua has served as a President of the Georgian Association of Radiology and the Georgian Association of Telemedicine. He was elected as an honorary professor at Graz Medical University in 2010, Baku State University in 2012, and the Georgian David Agmashenebeli University in 2012, etc. He is the author of more 600 scientific publications and nine monographs.

Dudana Gachechiladze, MD, PhD, is Scientific Supervisor of the Ultrasound imaging Department of the Institute of Clinical Medicine, Tbilisi, Georgia. She is a Professor of Radiology in the department of Diagnostic Medicine of Ivane Javakhishvili Tbilisi State University , The head of programme of the Medical education of Caucasus University. Member of the National Medical Academy of Georgia. Dr. Gachechiladze is Vice-Editor of the Georgian Journal of Radiology. She is a member of the European Society of Radiology Education Committee and a number of other associations and societies as well. She is the author of more than 150 scientific publications, including two monographs.