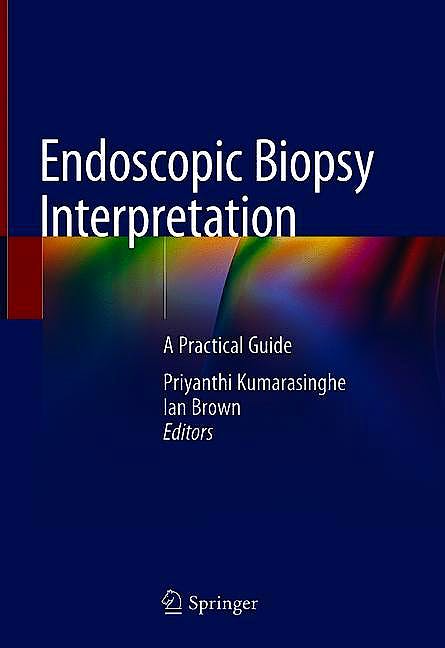 The volume of endoscopic biopsies being performed continues to grow rapidly and they now represent one of the most common specimens encountered in routine surgical pathology practice. It is essential to maintain the balance between the speed and accuracy while integrating emerging sophisticated pathology techniques into endoscopic biopsies in routine practice. Microscopic appearance is virtually diagnostic of certain diseases. In others a diagnosis may be rendered only after correlating the microscopic pattern with clinical clues aided by ancillary tests.

This text provides a guide to systematic approach of endoscopic biopsies to render a safe, quick and accurate pathological diagnosis in an integrated manner as well as important information that pathologists and clinicians should know to get the best value of endoscopic biopsies. The first chapter introduces the key microscopic features that are normal and abnormal in the gut mucosa as appreciated in an endoscopic biopsy. The second chapter presents a general overview highlighting the neoplastic and non-neoplastic patterns that are common to the entire tubular gut. Because some patterns are common to many sites, an overarching chapter gives the reader a generalized approach, which will be further refined in subsequent site specific chapters. The disease etiologies of each pattern are discussed, with emphasis placed on the most common causes that will be encountered in clinical practice. The subsequent chapters that follow then concentrate on patterns encountered at specific anatomical locations. Under each anatomical location (esophagus, stomach, small intestine and large intestine) site specific patterns of both neoplastic and non-neoplastic conditions are described. Conditions that affect many sites in the gastrointestinal tract are discussed in detail in the most relevant site chapter, but are referred to in other chapters as the reaction pattern/s they produce at that site is discussed. Ancillary tests that are required for a diagnosis of some diseases in particular neoplastic conditions are listed with tips for interpretation. This is presented mostly in a table format to assist day-to-day quick reference. In keeping with recent advances of using small biopsies for testing clinically relevant bio markers, important information that the pathologists and clinicians need to know is highlighted in appropriate sites. Authored by experts in the field, each chapter is presented under headings that include diagnostic features, patterns with relevant endoscopic and clinical clues, traps and overlapping features, and appropriate ancillary tests including clinically relevant molecular signatures in endoscopic biopsies.