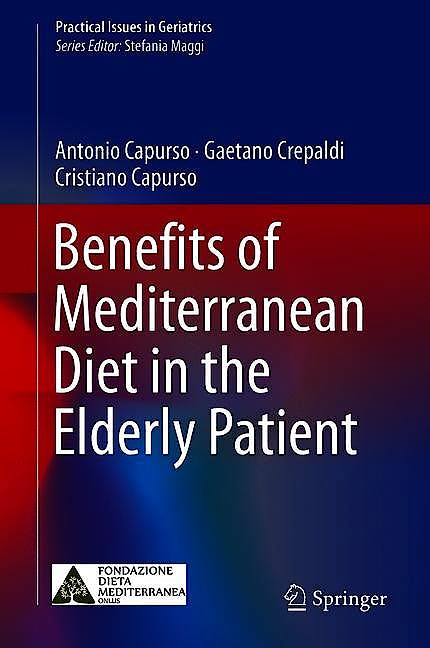 This book illustrates the role of Mediterranean diet in connection with well-being and particularly its impact on health and elderly care, as well as on the mechanisms of aging.

Aging is a natural process of human life. The knowledge that a healthy dietary regimen like the Mediterranean diet can effectively prevent or delay many diseases typically affecting aging people may help to better manage the aging process. From this point of view, knowledge of the numerous benefits of the Mediterranean-style diet may effectively promote better management of the burden of elderly care.

As early as the 1950s, Ancel Keys pointed out the effectiveness of the Mediterranean diet in helping to control, and possibly avoid, myocardial infarction and/or cholesterol metabolism. Quite soon after the first studies were published, it became clear that the Mediterranean diet was beneficial not only in connection with cardiovascular disease but also many other diseases, from diabetes to hypertension, from cancer and thrombosis to neurodegenerative diseases, including dementia.

Examining those benefits in detail, this book offers a valuable educational tool for young professionals and caregivers, as well as for students and trainees in Geriatrics and Nutrition.

Antonio Capurso was born in Monopoli, Italy, in 1937. After graduating in Medicine at the University of Bari in July 1962, he worked at the Faculty of Medicine of the University of Bari, first as Assistant Professor from 1963 to 1984, then as Associate Professor in Internal Medicine from 1984 to 1986 and finally as Full Professor of Internal Medicine and Geriatrics from 1986 on. Between 1967 and 1995 he engaged in research stays at various European universities (Germany, the UK). From 1986 to 2009 Prof. Capurso was Director of the postgraduate School of Geriatrics at the University of Bari, and an official member of the EUGMS Committee (European Union Geriatric Medicine Society) as Italian delegate from 1996 to 2008. He retired from University in November 2009. Prof. Capurso has authored more than 250 papers in national and international journals and several medical books. His fields of interest include geriatrics, nutrition, atherosclerosis, dyslipidemia, Alzheimer's disease and other cognitive declines.