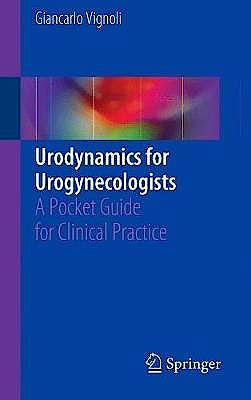 Urodynamics for Urogynecologists. A Pocket Guide for Clinical Practice

This book offers gynecologists and urogynecologists a pocket guide to urodynamic testing in women with lower urinary tract symptoms. In female urology, the main indications for urodynamics are urinary incontinence, pelvic organ prolapse, urgency-frequency syndrome (also known as overactive bladder), emptying disorders and painful bladder. By collecting quantitative measurements while reproducing the patient's voiding symptoms where appropriate and possible, urodynamics helps to identify the cause of symptoms, supports management and facilitates prognoses. However, despite the undeniable advantages, the role of urodynamics in female urology is hotly debated. The book starts by describing the physiological background and methodological considerations for urodynamic best practice in the preclinical setting. It then explains how to perform urodynamics correctly - so-called "good urodynamic practice" - to increase the readers' confidence and ability to perform and interpret urodynamic investigations. Lastly, it reviews the advantages and disadvantages of urodynamic testing in each of the key clinical female urology conditions. A separate chapter focuses on the peculiarities of diagnosis and management for female patients with neurogenic bladder. This guide offers a valuable tool for gynecologists, urologists and urogynecologists, as well as a ready source of information for all physicians involved in diagnosing and treating lower urinary tract disorders in women

Giancarlo Vignoli is a consultant urologic surgeon at Casa di Cura Madre Fortunata Toniolo, Bologna, Italy. He trained at Policlinico S.Orsola - Malpighi in Bologna, where he subsequently completed his doctoral thesis on the "Role of Urodynamic Studies in the Assessment of Lower Urinary Tract". He completed his subspecialty training at the University of Bologna's Department of Urology, where he worked as a urologist until December 2009. Dr. Vignoli has a particular interest in functional urology and urodynamic techniques. He is co-Founder of the Societa Italiana di Urodinamica (SIUD), and he has also served as vice-president and scientific secretary of SIUD and the Associazione Italiana di Uroginecologia (AIUG). He is a member of the most important Italian urogynecological associations and societies. He co-authored the 1st edition of the EAU Guidelines on Diagnosis and Management of Female Urinary Incontinence and is a reviewer for the International Urogynecology Journal and Pelvic Floor Dysfunctions. He is the author of Urodynamics: A Quick Pocket Guide, Springer, 2017.