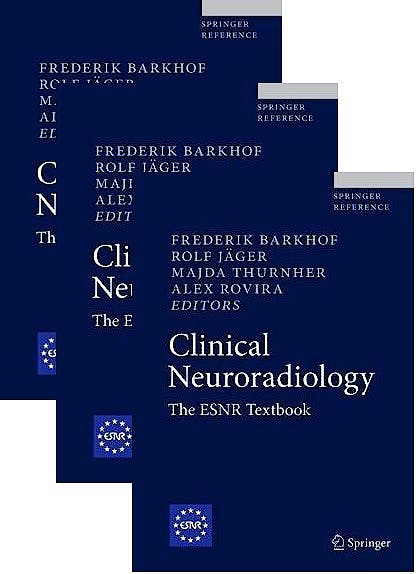 This superbly illustrated 3 volume textbook, endorsed by the European Society of Neuroradiology, explains in detail the clinical importance of neuroradiology in complementing history taking and physical examination during the workup of patients suspected of having neurological, neurosurgical, or psychiatric disorders. The role of imaging of the brain and spinal cord is described across the full range of relevant conditions, including, cerebrovascular diseases, trauma, CSF disorders, developmental malformations, inflammatory diseases, epilepsy, tumors and tumor-like conditions, neurodegenerative diseases, metabolic conditions and neuromuscular disorders. The structured approach to imaging and image analysis will ensure that the book is an invaluable resource for neuroradiologists in training and clinicians alike. Starting from the clinical indication, suggestions for imaging protocols are provided and checklists of common findings and aspects key to interpretation are presented. The book is published within the SpringerReference program, which combines thorough coverage with access to living editions constantly updated via a dynamic peer-review process. Sections in the Textbook:

Frederik Barkhof received his M.D. from VU University, Amsterdam (NL), in 1988, and defended his Ph.D. thesis in 1992, for which he received the Philips Prize for Radiology (1992) and the Lucien Appel Prize for Neuroradiology (1994). Since 2001, he serves as a Full Professor in Neuroradiology in the Department of Radiology and Nuclear Medicine at VUmc. In 2015, he was appointed Full Professor of Neuroradiology at the institutes of Biomedical Engineering and Neurology at UCL in London (UK) to translate novel imaging techniques and became a fellow of the Royal College of Radiology. Professor Barkhof was the Chairman of the Dutch Society of Neuroradiology and the MAGNIMS study group for many years. He leads the Queen Square MS Centre Trial Unit, involved in the analysis of multicenter drug trials. He serves on the editorial boards of Radiology, Brain, Multiple Sclerosis Journal, Neuroradiology, and Neurology. In 2018 he received the John Dystel Prize by the AAN and NMSS for his significant contributions to MS research. In 2019, he became a senior fellow of the ISMRM. Barkhof's research interests focus on childhood white matter disease, multiple sclerosis (spinal cord MRI, gray matter, atrophy, and histopathology correlations), aging (white matter lesions and microbleeds), and dementia (structural, functional, and molecular MR and PET). He has (co)authored more than 1000 papers referenced in PubMed, and is listed among the 3000 most influential scientists worldwide by Thompson-Reuters. He is the author of the books Neuroimaging in Dementia and Clinical Applications of Functional Brain MRI. Cumulatively, he has received in excess of EURO25 million in grant money from various national and international funding agencies and has performed contract research for all major pharmaceutical companies, with a cumulative contract value exceeding EURO15 million. More than 40 Ph.D. students have graduated under his supervision and 3 of them have subsequently attained a full professorship.

Hans Rolf Jager studied Medicine at the Universities of Freiburg, Germany, and Montpellier, France (as recipient of a bursary from the French government). He obtained his M.D. with "magna cum laude" at the University of Freiburg in 1983. After 3 years in Internal Medicine, he underwent training in Radiology at the Hammersmith Hospital, London, and obtained the Fellowship of the Royal College of Radiologists in 1991. Subsequently, he trained in Neuroradiology at the National Hospital for Neurology and Neurosurgery, Queen Square, London, and in Interventional Neuroradiology with Pierre Lasjaunias at Hopital Bicetre, Paris. Rolf Jager became Consultant Neuroradiologist at the National Hospital for Neurology and Neurosurgery in 1997, with joint academic appointments at the UCL Institute of Neurology, where he was promoted to Full Professor in Neuroradiology in 2014. During the course of his career, Rolf Jager has been implementing advanced MR imaging techniques, such as gadolinium-based perfusion techniques, hemorrhage-sensitive imaging (T2_ and SWI), carotid plaque imaging, intracranial vessel wall imaging, and ASL perfusion imaging and angiography. He thereby created platforms for clinical translational research, the results of which made seminal contributions to the understanding of disease processes and influenced patient management. His clinical interest and research focus are cerebrovascular diseases, brain tumors, as well as neuro-infection (in particular HIV), and neurodegenerative diseases. He has been the imaging lead of several national and international multicenter clinical trials in these fields with an overall grant funding of GBP5.6 million. Rolf Jager has built strong research collaborations with leading academic institutions in Europe, the USA, and South America, and regularly supervises visiting fellows from these institutions. He has supervised 16 Ph.D. students at the UCL Institute of Neurology. He has published 180 peer-reviewed articles, including several publications in the New England Journal of Medicine, Lancet Neurology, and Brain. He has published 1 book and 25 book chapters and is editor of the Neuroimaging Section of Grainger and Allison's Diagnostic Radiology. Rolf Jager was Chairman of the Publications Committee of the European Society of Neuroradiology from 2004 to 2009 and has been a regular member of the teaching faculty of the European Course of Neuroradiology, as well as educational speaker at the European Congress of Radiology (ECR) since 2003. As an internationally sought-after speaker. he has given 60 invited talks in the past 5 years.