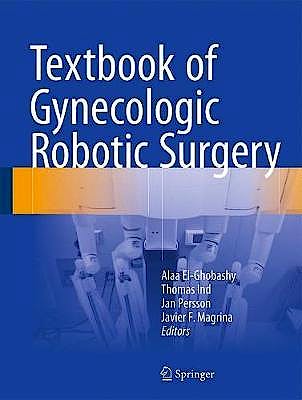 This book is not only a compilation of the knowledge and experiences of the best robotic surgeons around the world, but it has also incorporated the recent advances and updates in Gynaecological surgery.

It is designed to provide a detailed guide to common robotic Gynaecologic procedures for the purpose of helping novice surgeons in their transition to robotic surgery and seasoned robotic surgeons to refine their surgical technique and expand their repertoire of robotic procedures.

The descriptive, step-by-step, text is complimented by figures, intraoperative photographs and videos detailing the nuances of each procedure. Emphasis is placed on operative setup, instrument and equipment needs and surgical techniques for both the primary surgeon as well as the operative assistant.

This volume will provide unique insights into robotic Gynaecologic surgery and reduce the learning curve of accomplishing these increasingly popular procedures.

Mr Alaa El-Ghobashy, Consultant Subspecialist in Gynaecological Oncology Surgery. He graduated from the Medical School in 1990 and later achieved a Master's Degree in Gynaecological Ultrasound in 1995. His career history includes training in different aspects of Obstetrics and Gynaecology in a variety of health care settings both in Egypt and UK. He completed two Medical Doctorate degrees in Gynaecology in Liverpool. On finishing his general training, Mr El-Ghobashy spent additional two and half years (Fellowship) training in, studying and researching different aspects of Gynaecological Cancers in Leeds, England. He is a Member of the RCOG, the BSCCP and the ESGO. He is a Council member of BIARGS and recently hosted the 5th annual conference of Robotic Surgery in Wolverhampton. He published several articles in peer-reviewed journals and textbooks. Currently, he is an associate Editor of the IJMCR. He was a consultant in Plymouth between 2009 and 2011. He was appointed as a consultant in Wolverhampton in April 2011.

Mr Thomas Ind is a Gynaecological Oncology Surgeon. He is certified as both a specialist and sub-specialist by the RCOG and is registered as such by the GMC. He qualified in medicine from St Bartholomew's Hospital in 1989 and continued his postgraduate training in London before being appointed as a consultant to The Royal Marsden in 2002. He had previously been a sub-specialty fellow at The Royal Marsden and had spent some time in the 1990s in Australia. Mr Ind has numerous papers and book chapters to his name, and has been the female reproductive tract editor for Gray's Anatomy. He holds certification in colposcopy from the BSCCP and RCOG and a level three certification in laparoscopic surgery. His main interests include the management of endometrial cancer in women with co-morbidity, complex laparoscopic surgery, cervical cancer, fertility-sparing surgery, single incision laparoscopic surgery, radical surgery for ovarian cancer and robotic surgery.

Professor Jan Persson is a Professor and head of Gynaecological and robotic surgery at the Department of Obstetrics and Gynaecology, Skane University Hospital, Lund Sweden, a tertiary referral Centre covering the southern health region of Sweden with 1.8 million inhabitants. In 2005 he was one of the pioneers for the implementation of Robot assisted surgery within Gynaeoncology and currently around 300 Gynaecological Robotic cases are performed annually at the institution. He was the first to describe a technique for robotic radical fertility sparing trachelectomy and he is the author of 19 peer reviewed scientific publications within the field of robot assisted surgery. Since several years he runs international master classes in robot assisted surgery covering the whole spectrum of indications within Gynaecology and Gynaecological oncology. He is immediate past president of SERGS and honorary member of BIARGS.

Professor Javier Magrina is a Professor of Obstetrics and Gynecology, College of Medicine, Mayo Clinic and Head of Division of Gynecologic Oncology, Department of Obstetrics and Gynecology, Mayo Clinic Arizona. In 1973, he obtained his PhD from the University of Barcelona Medical School, Spain. Javier completed the Gynaecological Oncology fellowship programme at the University of Kansas in 1980. He was the Director of the Division of Gynecologic Oncology, University of Missouri, Kansas City, KS between 1981 - 1987. Professor Magrina was then appointed as a Chair Department Gynaecology, Mayo Clinic, Scottsdale, AZ till 2005. He subsequently directed the Robotic surgery fellowship programme (2007 - 2010). Professor Magrina published enormously in the field of Robotic surgery and edited too many chapters/books.